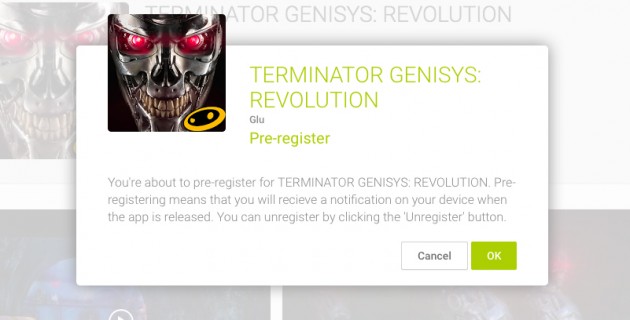 Google Play has a new feature thatâ€™ll make sure youâ€™re made aware of a new appâ€™s release the second that it arrives on the storeâ€™s digital shelves.

Pre-registration for apps is now live on Google Play, and the first app to feature it is Terminator Genisys: Revolution. When you pre-register, youâ€™ll get a notification on your devices when the app actually launches. If you change your mind and decide that you no longer want to be alerted upon the appâ€™s release, you can unregister as well.

Usually when an app maker reveals or launches a new app, they make announcements just like Glu Mobile and Terminator did for Terminator Genisys: Revolution. What makes Google Playâ€™s pre-registration feature notable is that it allows developers to gauge early interest in their apps and then have a user be directly notified of an appâ€™s release without any added effort from the dev. Because of this added benefit, weâ€™re betting that weâ€™ll see pre-registration become a popular feature for Android devs in the future.