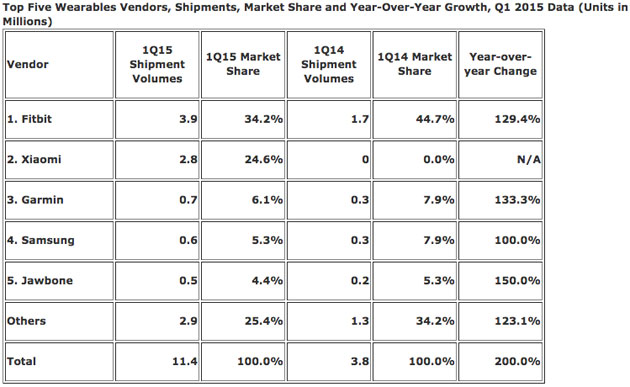 When you think of wearables, you generally think of Android Wear or Fitbit fitness bands. But what if we told you that the second biggest manufacturer of wearables was actually a Chinese company, and that only one Android Wear manufacturer was in the top five? Yep, Xiaomi is the number two wearable vendor in the world.

Controlling a quarter of the wearable market share, Xiaomi is awful close to the first place company, FitBit. In third place is Garmin with a measly 6 percent of the market share. Samsung is at 5.3 percent, and considering the company makes plenty of Tizen wearables, Android Wear is probably only a fraction of that. The rest of Android Wear is grouped into the “others” category.

With the Apple Watch out, this might change next time we see these statistics. But it’s impressive that Xiaomi, a company selling its single wearable in China since late last year, has gained so much traction so quickly. I guess it helps that the Mi Band is only $15!