Why I have Google Maps navigate me to work every day 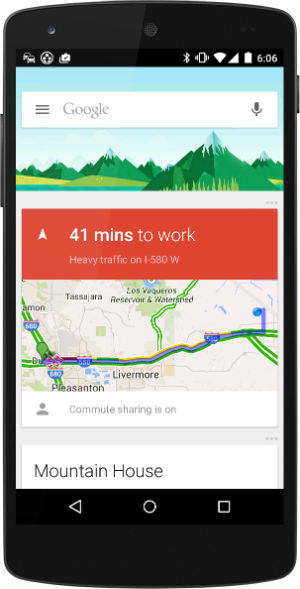 After a series of unfortunate events, a big rig hauling thousands of pounds of tropical fruit collided with a truck, spilling the fruit all over the highway median and westbound lanes of I-580. Similar to many of you, I commute to my day job. I live in the California Central Valley and commute into the Bay Area. I live about 27 miles away from where I work. If there wereÂ no traffic, it would take me about 30 minutes to get from home to work. But in the Bay Area, no traffic isn’t a thing. On average, it takes me about 50 minutes to get to work in the morning if I leave around 6:00 am. While I was getting ready on the morning of the July 28th, Google Now was already barking at me telling me my commute was going to be longer than normal. I appreciate that service from Google Now to encourage me to speed up my morning routine a bit if needed, but I don’t think it’s as helpful as using Google Maps.

When I sat down in my car to begin my commute theÂ morning of July 28th, I did the same thing I do every morning: fireÂ up Google Maps andÂ have it navigate me to work. I drive to my work every work day and I know exactly how to get there. I don’t use Google Maps because I need help with directions; I use Google Maps to get me to work the fastest way possible and to avoid commute disasters, like thousands of pounds of tropical fruit on my side of the freeway.

Google Maps showed me my fastest communte time: over one hour. That’s a bummer. And it was taking me a route I have never gone before and never would have thought to take. Google let me know there was an accident on I-580, but I had no idea how bad it was. I had no idea there was exotic fruit all over the freeway, I just knew I had stuff to get done at work that day and decided to followÂ the route that Google suggested.

Google was wrong. It took me about an hour and half to get to work that day. But Google was very right about the route. It took me a very roundabout way around the accident and put me on the freeway a few exits after it. It was one of the few times I’ve seen I-580 empty. I was late for work that day, but my co-workers that share commutes similar to mine never made it. They sat on on-ramps for hours until deciding to turn around and go home.

Some of you may feel like I missed out on snow day, an unplanned day off of work. But I like to decide when I get to take my days off, and I don’t like to waste my time sitting on an on-ramp. Google says that it offers some amazing features likeÂ “live traffic conditions, incident reports, and automatic rerouting to find the best route.” It does those things. With Google Maps and Google Now, Google will tell me how long it thinks my commute will be every morning and keeps me updated on my evening commute home. Usually it does a darn good job with its estimations.

One thing that is super helpful with my commute is that I have several options for alternate routes to get to and from work: side roads, back roads, you name it.Â

I’ve lived in some places where there was only one way to and from where I wanted to go, and soÂ Google’s automatic rerouting wouldn’t have beenÂ a big help. But where I live, it saves me time on a near-daily basis. Often while in the middle of the commute, the fantastic Google Maps voice will chime in telling me “A faster route is now available.” I love it when that happens because it helps toÂ make the daily commute a little less mundane. All you have to do is is hit the accept button and follow the new route, and minutes will be saved. Also, if you have your mobile device mounted in an easy-to-see area, Maps constantly displays alternate routes with commute times for those routes. It feels like Google often doesn’t bother you with faster route indications unless it will save you more thanÂ a few minutes, but every once and a while you can catch an alternate route that is a couple minutes faster.

Google Maps is great for if you don’t know where you’re going, but to me it’s more than that. Even if you know exactly where you’re going, try firing up Google Maps and let it take you to where you are going. It may suggestÂ the route you always take, or it may driveÂ you around some unexpected traffic or accident. The worst case scenario is you take a normal route and yourÂ phoneÂ battery is discharged a little more than normal. Give it a shot, because it really can’t hurt. If you live in an area with lots of traffic, it could even help you outÂ by getting you where you’reÂ going a little faster.

What do you use on the way to work? Are you a big Google Maps user? Do you feel like Waze is better? What are your commute hacks? Let us know your thoughts by commenting below! Happy commuting!