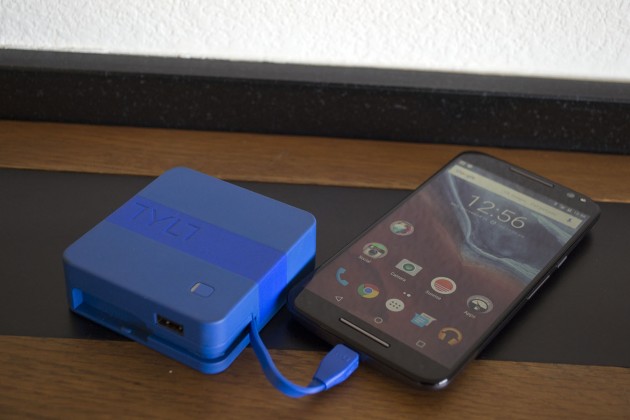 Power banks are fantastic accessories to keep around for emergencies. WhetherÂ you’re abroad or just want to avoid missing a Snapchat, having some form of communication always availableÂ is important. So instead of carrying around a charger and a separate power bank, why not carry both in one device?

Not only is the TYLT ENERGI 6K is unique in that it’sÂ both a charger and a power bank, it also features both a built-in cable and an extra USB port. This allows you to charge your device with no additional cables and thenÂ charge a second device using a USB cable.

The main draw of this accessory is its travel readiness. You bring it along, charge your device or two at night, and it’ll charge the internal battery after your devices are fully charged. In the morning, unplug it and bring it along with you as a 6,000mAh power bank to top off your devices ifÂ they die.

For travel, the TYLT ENERGI comes with a US flip out plug that folds flush and out of the way. There’s also a model that includes both UK and European adapters for international travel for an extra $10, which is a really nice touch.

In terms of charging, it’s exactly what you’d expect from a standard charger. It can output a total of 2.4 amps, which is fast but not Quick Charge fast.

The short built-in microUSB cable is a fantastic way to charge your device on the go. Plug it in, toss it into a bag, and it’ll charge without messy long wires. When not in use, the wire folds into a gap on the side of the charger. Despite this, the unitÂ remains fairly compact.

If you’re interested in the TYLT ENERGI, hit the link above to check it out. For you iPhone users, there’s also a version with a Lightning cable for $10 more. I think the TYLT ENERGI isÂ an invaluable travel companion, and though the price is high (TYLT makes expensive, but well-built, products), it’s creative and useful. You can get power banks for much cheaper, but I quite like this one for its design and features.