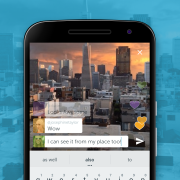 Two months after launching on iOS, Periscope has made its debut on Android.

Twitterâ€™s Periscope app is now available for download from Google Play. Just like on iOS, you can use Periscope to stream live video from your phone (or tablet!) to your Twitter followers. If youâ€™re a viewer, you can get notifications when someone your following starts a livestream, give them hearts if you like what theyâ€™re showing, and you can view recent broadcasts as well.

While Periscope for Android includes many of the same features of the iOS app, it does have some special Android touches. For example, the developers have included a Material Design-esque floating action button to start broadcasts, which differs from the broadcast tab thatâ€™s located at the bottom of the screen on the iOS version of Periscope.

Periscope is arriving on Android weeks after Meerkat emerged out of its open beta, meaning that weâ€™ve now got two nice options for streaming live video. Obviously it wouldâ€™ve been nice to get Periscope at the same time as our iOS counterparts, but the good news is that at least Twitter has taken the time to make Periscope feel like a legit Android app rather than a simple iOS port.

You can download Periscope at the Google Play link below.