In the event of presentation of the Nexus 5X, where we had the chance to know the news of Marshmallow hand of one of the guys from Google, you will pay much attention to one of the most interesting features of Android 6.0 and is none other than Doze. A feature that will attempt to synchronize the way they are waking apps to take appropriate data to launch their notification and not take care of “damaging” the life of the battery. A system that Google has boasted that tries to bring to light that we realize how important will the battery in a device under Android 6.0 Marshmallow.

It is in the new Sony devices such as the Xperia Z5, Xperia Z5 compact and Xperia Z5 premium, which thus in association with the Stamina Mode Japanese manufacturer, you will get all their advantage with an increase in battery could reach 400%. This will allow these three terminals can approach what Sony achieved with the Xperia and Xperia Z3 Z3 compact, where the latter gave the key to a phone that could reach two days of autonomy without having to go through the electric charge . A milestone that allowed him to be one of the best terminals in the sense of those who are still on the market

Stamina mode
Sony’s Stamina mode is one that works best to reduce battery consumption so you can reach all day with little muss. Actually, what this is that when the terminal is in idle mode, cut all Internet connections to these background activities that handle then launch the relevant notifications. These apps in the background are responsible for consuming a large percentage of the battery, so that, under this mode, the short pit so that when the user turns the screen of your mobile, they are open the door to access the Internet and download data to launch such notifications WhatsApp, Facebook and other apps. 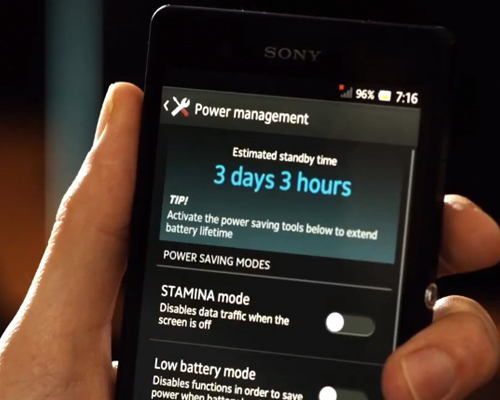 Another of his greatest strengths is its whitelist of apps to which he always allow access to the Internet to never miss a message Telegram. With this we obtain that only the apps we want to get notifications, other data can access Internet at the same time safeguard the battery that others could use if we did not have this mode enabled stamina.

Be reckoned with this Sony Stamina mode can also access the calls and SMS and MMS, cutting, in short, everything that has to do with the internet connection, which is precisely what makes the percentage of battery diminishes to forced labor in the day steps.

Android 6.0 + Stamina Mode = All power
According to a tweet of filtering news @ Ricciolo1, when the Sony Xperia Z5, Sony Xperia Z5 Compact and Sony Xperia Z5 Premium to be updated to Android 6.0 Marshmallow, STAMINA mode greatly enhance what you get to be the real kings of the terminals have greater autonomy.

Very positive news for users who have already agreed to purchase these terminals and that was supposed to follow the trail left by the Xperia and Xperia Z3 Z3 compact where autonomy was excellent, and that, for now, with Android 5.1.1 is not entirely expected. Although I must say, that in the latest update released by Sony to correct Stagefright, has improved battery at rest and when the screen is active, so that Android 6.0 will arrive in November, it may be necessary to purl have the best terminals with better battery life.