The limited edition Iron Man Galaxy S6 edge has been outed, and it looks good 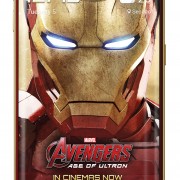 Do you know where your wallet is? Ok, well youâ€™d better lock it up, because youâ€™re probably going to want to throw it at your screen once youâ€™re done reading this post.

Samsungâ€™s Iron Man Galaxy S6 edge has been fully revealed, and it looks pretty awesome. The phoneâ€™s front and rear are red and its outer edge and accents are gold, matching the look of Iron Manâ€™s suit. Meanwhile, the back of the device is emblazoned with Iron Manâ€™s face, and Samsung is including a clear cover for the back of the phone to help protect it and keep Iron Manâ€™s facade looking good. Unfortunately, rather than including Robert Downey Jr. inside this Iron Man GS6 edge, Samsung has simply thrown in 64GB of storage.

Also included with the Iron Man GS6 edge is a matching wireless charger. The outer edge is red and the inner portion looks like Iron Manâ€™s Arc Reactor, helping to tie the entire package together.

Samsung says that the Iron Man Galaxy S6 edge will launch in Korea on May 27, followed by releases in China and Hong Kong in June. Thereâ€™s no word yet on how much the whole package will cost.

The Galaxy S6 and Galaxy S6 edge have gotten a lot of praise for their looks, with some folks saying that theyâ€™re two of Samsungâ€™s best-looking phones to date. The red-and-gold color scheme of this Iron Man edition is sure to make the GS6 edge even more attractive to a lot of folks. Unfortunately, right now it sounds like the phone is going to be pretty hard to come by, with Samsung only talking about launches in a few markets. We know that Samsung says that the phone is a â€œlimited edition,â€ but still. Hopefully a few more launches will be announced in the coming weeks. While we wait, you can drool over more images of the Iron Man GS6 edge by viewing the gallery below.