Star Wars: KotOR is 70 percent off and LEGO Star Wars is back 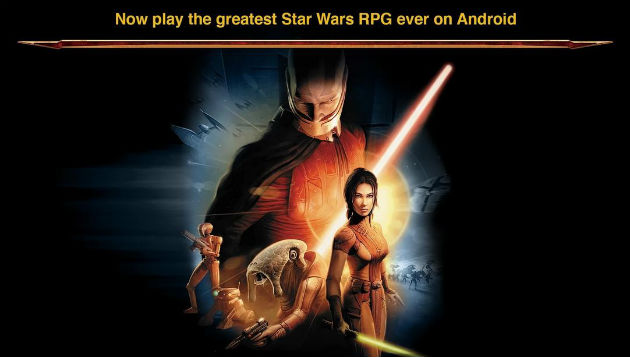 It’s safe to assume the Star Wars content is going to kick it into lightspeed as we get closer to the release of Episode 7 in December, but for now it is still novel enough that it is worth noting.

Star Wars: Knights of the Old Republic first hit Google Play back in December, but after a brief launch sale at $4.99 it has remained at $9.99. Despite the fact that this is an enormous and immersive RPG, that’s a steep price for most people, so today’s sale bringing it all the way down to $2.99 is a nice opportunity to pick it up on the cheap.

If you’ve never played KotOR, it’s a fantastic game and you will get at minimum dozens of hours of gameplay out of it. A couple caveats about the game: When I said it is enormous, that also includes the size of the download, which is about 2.5GB, so make sure you’ve got the space. I would also say that it lends itself to a larger screen (five inches or above), but you can certainly play it on something smaller. It does support a controller, so if you somehow fall into the Venn diagram of NVIDIA Shield Portable or Tablet owners that haven’t played KotOR,Â then I would buy this immediately.

For those looking for a slightly more lighthearted Star Wars game forÂ your Android device, LEGOÂ Star Wars: The Complete Saga is again available on Google Play for $6.99. It includes both LEGOÂ Star Wars: The Video Game game as well as LEGOÂ Star Wars II: The Original Trilogy. Early reviews are looking pretty positive, but there are some reports of frame rate issues even on current flagships, so you might want to hold off and see if they manage to fix that in an update.

If you download either one, let us know what you think. I’m at least going to be picking up KotOR.I haven’t played it in 10 years and I think it’ll be great to revisit on the SHIELD Tablet or even the SHIELD console.