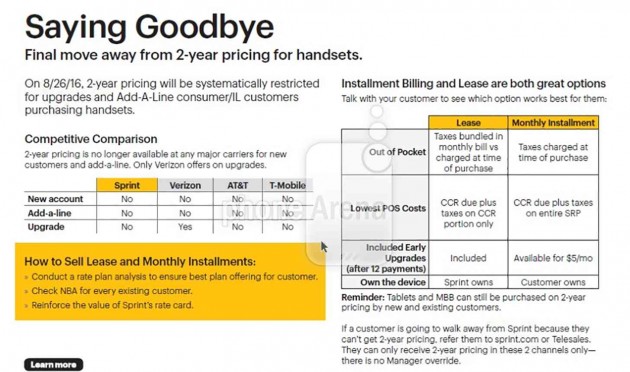 Ever since the start of 2016, Sprint has had a love-hate relationship with two-year contracts. In early January they ditched them, but then in February brought them back because they said customers wanted themÂ as an option.

Travel back to May of this year and it was rumoredÂ that Sprint would be ending two-year contracts, yet again. That didn’t pan out as expected, but only because Sprint took a bit longer to reach that destination. As reported by PhoneArena, Sprint is now in the “final moves” to say goodbye to two-year contracts, at least when it comes toÂ offering them in its physical stores.

The document shared in the original report is backed up by a Sprint assistant store manager publishing content on Reddit, both of which say Sprint stores will stop offering two-year contracts on Friday, August 26. So youÂ want to pick up a new smartphone in a store, you’llÂ need to do so with a lease or an installment plan.

It’s worth noting that Sprint customers will apparently still be able to getÂ two-year contractsÂ after August 26 via telesales or on Sprint.com. Sprint will offer two-year contracts for tablets and mobile broadband devices.

The surprising part isn’t so much that Sprint is ending two-year contracts, just like the other carriers have, but the way that Sprint has handled it up until this point. After all, while the leaked document says the contracts will stop being offered by August 26, there’s no guarantee it will happen.

Are you still attached to a two-year contract?