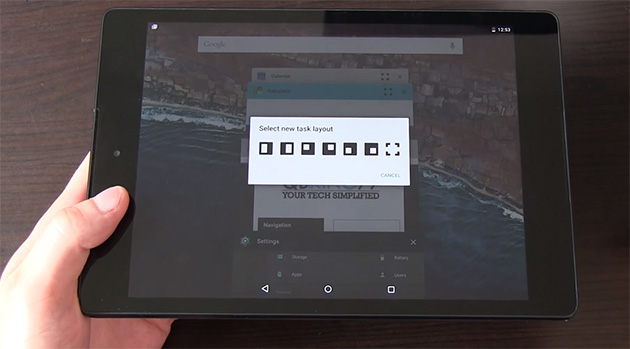 Android 6.0.1 is still fresh out of the oven, but a new rumor will leave many craving next year’s Android 6.1 release. A new rumor claims that Google is planning to bake in a few enhancementsÂ forÂ app permissioning andÂ split-screen app support into Android 6.1 whenÂ it’sÂ released next June. Android 6.1 is expected to be a minor update and will carry the Marshmallow label, so we’ll likely be treated to an even bigger release in the second half of 2016.

An early version ofÂ multi-windows functionalityÂ was actually hidden awayÂ in the Android M preview build. It allowed users to choose between multiple screen layouts which pinnedÂ two apps side-by-side or four apps in a grid layout. The functionality can be seen in the video below. Split screen or multi-window supportÂ (we’re not sure what the final name will actually be) will certainly improve the functionality or Android tablets, but it’ll likely be heavily used on smartphones as sell since many people now use devices with displays that are 5.5-inches or larger.

While we’re delighted to hear that split-screen support in Android is finally on its way, the rumor’s timeline for Android 6.1′s release conflicts with a rumor regarding HTC’s 2016 flagship phone – the HTC Perfume. AccordingÂ toÂ @LlabTooFeR, the HTC Perfume is expected to launch with Android 6.1. Since theÂ retail launch of HTC’s flagship phones typically fall between late March and the end of April, Android 6.1 would need to be released sooner or the HTC Perfume would launch before the software is available. At this point, it’s impossible to know how things will play out.

Do you think split-screen functionality will make Android tablets more appealing for consumers and developers?