ShiftWear: a new type of wearable 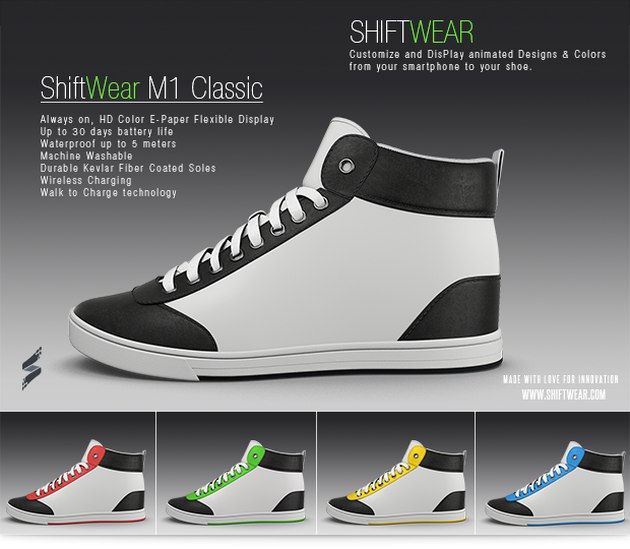 We’ve seen a lot of wearables hit the market in the past couple of years, but the majority have been watches and bands, with an occasional exception here and there. While the options have grown in variety, the market itself is still surprisingly homogenous. So how about wearables for your feet?

Enter ShiftWear, an extremely intriguing new pair of shoes that integrates technology directly into the shoe itself. In fact, the sidewalls of the shoes are actually e-ink displays. That likely sounds like a crazy concept, and it is, but it’s just crazy enough to be ridiculously cool.

Putting e-ink displays into the sidewalls of the shoes enables customization of the shoe design on a whim. The displays connect to an app on your phone that allows you to simply change the design as you please. ShiftWear sneakers even support animation, which means that you can put animations on the sides of your shoes, making it an incredibly cool feature. You can also use static images, which, because of the e-ink technology, won’t use any power until you change them.

ShiftWear have batteries that last for roughly 30 days, give or take a bit depending on your use of animations. The company behind ShiftWear also has some interesting plans if it reaches certain funding levels. For example, if $2 million in funding is reached, the company will integrate a technology that allows ShiftWear to charge as you walk, using the energy from your steps. In addition to that, ShiftWear will also feature wireless charging if this funding level is reached.

ShiftWear is currently in active funding on Indiegogo, with pricing starting at $150 for the low-end pair of shoes, and going up to $350 for the most elaborate pair. The minimum funding goal of $25,000 has already been reached, and as mentioned, there are several different pricing tiers that add perks when reached.