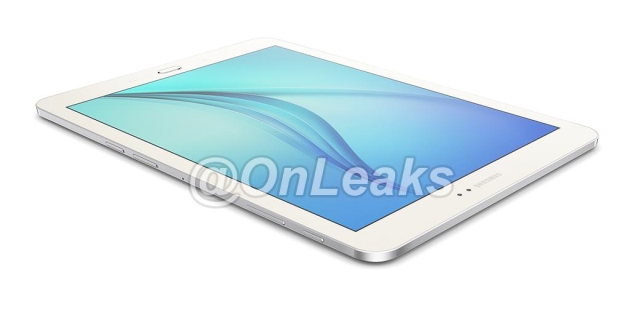 Samsung has a new tablet in the works, and it happens to be the successor to last year’s media-oriented Galaxy Tab S. @OnLeaks has released a new photo of the 9.7-inch Galaxy Tab S2 that features a metal and glass body that’s derived from the design of the wildly popular Galaxy S6. The front is simple white glass, with Samsung’s usual home button at the bottom of the display. The sides that we can see appear to be made of aluminum with a power button, volume rocker and what appear to be slots for both microSD and SIM.

In the past, @OnLeaks has revealed that the Galaxy Tab S2 would be quite thin, coming in at just 5.8 or 5.9mm at its thinnest. It also appears to be using the same 4:3 aspect ratio of the Nexus 9 and iPad Air, which is sure to frustrate some. It’s an odd change, considering that last year’s Galaxy Tab S was designed for peak multimedia performance and featured an incredibly sharp and colorful AMOLED display that was perfect for watching movies.

There’s no word yet on when the Galaxy Tab S2 will be officially announced, but we’re guessing that you’ll have to wait until summer.