Samsungâ€™s product planners explain the logic behind the Galaxy View

Donâ€™t call the Galaxy View a tablet because Samsung doesnâ€™t want it to be viewed as a tablet, instead the company calls it a â€œmovable display.â€™ We were the first to report earlier this year that Samsung would be coming out with thisÂ 18.4-inchÂ behemoth soon, the company started selling the movable display once a couple of weeks back. Many have asked what exactly is the logic behind this product thatâ€™s not being marketed as a tablet even though it looks and feels like a very large one.Â Samsungâ€™s product planners andÂ user experience designers have taken to the companyâ€™s official PR websiteÂ to explain the logic behind thisÂ device.

The Galaxy View was never meant to be a tablet. Samsung actually made sure to use big icons which are more intuitive and easy to read, thus eliminating the need for users to micro-operate the deviceâ€™s features with fine touch,Â says Hyun Kim, Senior Designer at Mobile & IT Communications Business.Â The product was designed to allow users to enjoy their favorite TV shows and movies anywhere they might be in the house which is why the Galaxy View has a two-way stand to alternate between different viewing angles. It even has a handle which makes it easy to hold the movable display in one hand even when walking.

In its lengthy post the team points to several different scenarios in which the Galaxy View makes sense, for example an amateur cook and keep it in the kitchen and follow recipes. Sports fans can take the display along with them from room to room without ever having to miss a second of the game, explains DaYoung Park, Manager of Product Strategy Team, Mobile & IT Communications Business.Â The designers have envisioned this product â€œas a fun and useful tool for everyone in the home, everywhere they live,â€ while pointing out that itâ€™s just as useful outside the home, as it serve a novel purpose on camping trips or educational tours.

The Galaxy View is already available for purchase in multiple markets across the globe including the United States, where it can actually be purchased for $100 less than its usual price via Amazon. 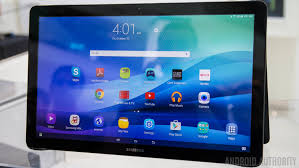