Samsung teases round face for next smartwatch, says â€˜get ready for the next Gearâ€™ 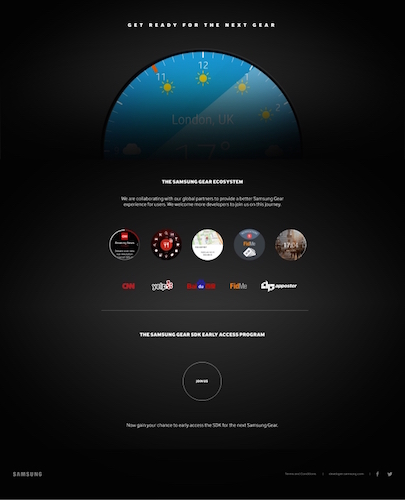 While Samsung wasn’t technically theÂ first company to launch a smartwatch, it was one of the first to jump on the fancy wearable bandwagon. The company has been rather quiet ever since Apple has taken the wraps off its own watch, but that looks to be changing soon, as the company has just announced that it will be inviting developers to gain early access to a future software development kit (SDK) to help build the “next Gear.”

In the invite, what looks to be very distinct and very round watch face can be seen, but there is little else to go on in the announcement. This marks the first time that Samsung has opened up its SDK for the Gear line ahead of the device’s announcement or launch, so Samsung is obviously hoping that developers can build plenty of apps to correspond with the wearable’s launch.

“Samsung has actively adapted its approach to wearable device development as the leader of the rapidly developing category,â€ said JK Shin, CEO and Head of IT & Mobile Communications Division at Samsung Electronics. â€œThrough meaningful and progressive innovation, Samsung welcomes to developers and industry leaders to join this open collaboration effort to enrich and create unique user experiences for a new smart mobile life.“

Developers that are interested can head through the link below to send in an application at their chance to build apps for the next Gear. When the new smartwatch will actually be unveiled, though, still remains to be seen.

Would you be excited for a round Gear smartwatch?