While visiting a friend in her charmingly cozy studio apartment full of beautiful worldly art and bountiful bookshelves, another friend lamented her lack of TV, because he wanted to watch a live basketball game. She said she usually watches TV on her laptop. At that moment, for the first time since I got my hands on one, I could confidently say, “The Galaxy View would be a great alternative for you.”

Bigger than a laptop, but smaller than a TV, the Samsung Galaxy View is a new type of tablet hybrid — part TV, part tablet — that suits anyone who watches a lot of video and either lives in a small place, or would like a supplementary screen for using around the house. This huge 18.4-incher teeters into TV territory with a main screen dedicated to popular streaming sites such as Netflix. It’s not exactly a mini-smart TV, since there’s no Ethernet or HDMI ports, and it doesn’t come with a remote or a keyboard, but it has full Android capabilities and access to all of the apps in the Google Play Store.

Why use a tablet instead of a TV? For the same reason one would choose a tablet over a laptop; it’s simply a conveniently portable option. Yes, it’s very big for a tablet — it’s even bigger than the soon to be released 12.9-inch Apple iPad Pro, which has a higher resolution yet costs a bit more. But the Samsung behemoth’s design features a useful built-in kickstand with a handle, to easily move it from room to room, a micro-SD card slot and a SIM card slot for Internet on the go. The downside is the flimsy and cheap plastic construction of its built-in kickstand, the lack of an HDMI port and disappointingly weak speakers. Oh, did I mention that it costs a whopping $599? (UK and Australia availability and pricing are not yet confirmed, but that converts to around Â£390 or AU$830.)

If you’re low on space, but not on cash, the Samsung Galaxy View is a unique option that might fit your needs. Considering you can buy two 40-inch Roku TVs for less than one Galaxy View, its lofty price is a tough pill to swallow. There isn’t anything else quite like it, however, if you like the idea of a giant Android tablet that could almost double as your coffee table. The Galaxy View is a slick tablet that works well as a TV alternative. Just be prepared to pay a lot for the privilege of portability. 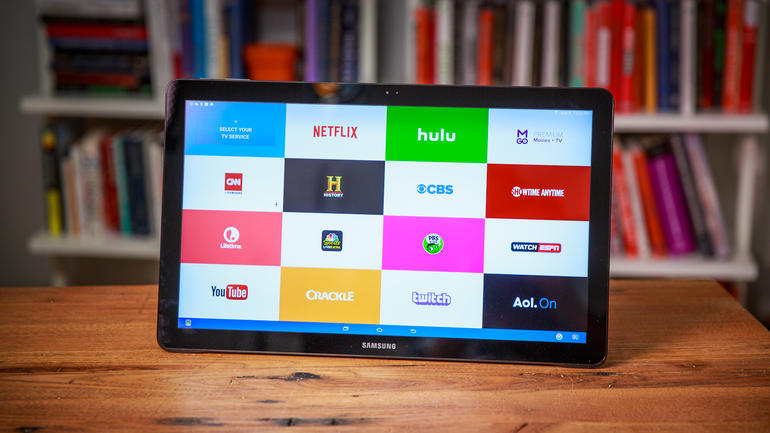 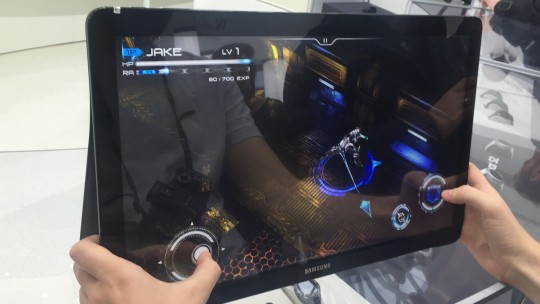 When I first saw the Samsung Galaxy View, it reminded me of a plastic binder clip. There’s an additional separate panel on the back that’s flat until you get to the top quarter of the tablet. At that point it curls back about 45 degrees. The part of the panel that’s slightly curved also houses an oval handle in the middle. It’s attached via plastic hinges and it can shift into two positions: one allows the tablet to stand upright, the other lets it lay down at an angle. The second position also frees up the handle to easily transport the tablet.

The back panel isn’t removable and there’s no low-profile option, meaning the tablet can never lay completely flat. Its mechanism isn’t very smooth, either. In order to switch its configurations, you push the panel’s protruding edge inward towards the chassis to connect with the back of the tablet, while the other edge flips outward, like a see-saw. It requires a forceful push and results in a loud violent slap every time. The plastic back panel also feels a bit rickety. It can easily bend under pressure, and since you need to put pressure on it to switch its position, I often found myself scared it would eventually snap in half. Luckily, it didn’t.

Like any tablet worth its weight, the View is portable, but this doesn’t mean it’s mobile. Despite mostly being made of plastic, it’s too heavy to carry around for a long time. Carrying it from the kitchen to the living room is fine, but you likely won’t be able to fit it in a carry-on bag when you leave for vacation. Since the back panel can’t lay flush to the tablet’s edge, it’s always protruding in some way. This gives it a clunky feel that makes it cumbersome to carry around if you’re traveling from one destination to another. It’s actually really annoying.

The Samsung Galaxy View is meant to be a big screen that’s stays put most of the time, but there is plenty of room for improvement. The built-in stand is functional, but it feels cheap and wonky. Samsung would benefit from paying attention to Lenovo’s Yoga tablets. Those include built-in stands that can position the tablet at various angles, and securely lay flush to the tablet’s edge when not in use.