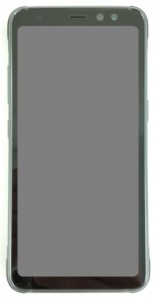 Samsung has seen great success with the launch of its Galaxy S8 flagship smartphone, but the company has further plans for the S8 line. Now revealed in an image leak, we can see Samsung’s upcoming Galaxy S8 Active, a more rugged version of the Galaxy S8. While the device will likely retain the same specifications as the primary flagship, the design has been tweaked.

The Galaxy S8 Active does not feature a dual-edged Infinity Display, instead opting for the traditional slab design. We can also tell that the edges of the design have been thickened and reinforced for drop protection. Samsung has opted to include the Bixby button that is unique to the Galaxy S8 line. The back of the device isn’t revealed in this leak, but we expect it to be metal or rugged plastic, rather than a more fragile glass design.

There’s no word on availability, but in the past, Samsung has offered Galaxy S Active devices on AT&T in the US. Stay on alert for the phone’s upcoming launch.