Samsung Galaxy S5 Neo: Analysis Of The Remake Of The Classic

Samsung Galaxy S5 Neo – Availability and Pricing
The Neo Galaxy S5 hit the market in October 2015. Samsung established to this renewed version of the S5 an official market price of 439 â‚¬ depending on the dealer and the price could drop to about 330 â‚¬. Today we can find on the market for â‚¬ 312.90.

Samsung Galaxy S5 Neo – Design and finishing
The external appearance is practically the same. The new Galaxy S5 Neo has only a few different strokes. The first thing I missed is the infrared sensor at the top and the second sensor is housed finger prints on the start button.

The dimensions are exactly the same as the Galaxy S5. Neither it has changed the position of the pendant that stays with volume controls on the left side and the power button on the right side. The remaining sensors and connections are kept in the same place as in the original model. The USB connector maintains its position but has changed the type. Before it was a type B USB 3.0 now uses the micro and micro USB 2.0 type B, pretty standard. 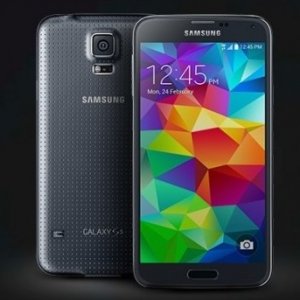 In the design itself have changed only a few details. The chrome frame Neo S5 is no longer so bright. It still retains its metallic appearance but a much less conspicuous and gray tone. The back has lost the look of plaster reducing the size of the dot pattern. The back cover of the Neo S5 fits perfectly into the Galaxy S5 and can be purchased separately, the perfect excuse to lose sight of the strip of S5. Furthermore touch cover S5 Neo is much nicer.Protection is in S5 Neo the same level as the predecessor. It also has protection against dust and water with an IP certificate 67. It is able to withstand complete immersion in water up to one meter for 30 minutes, no diving.