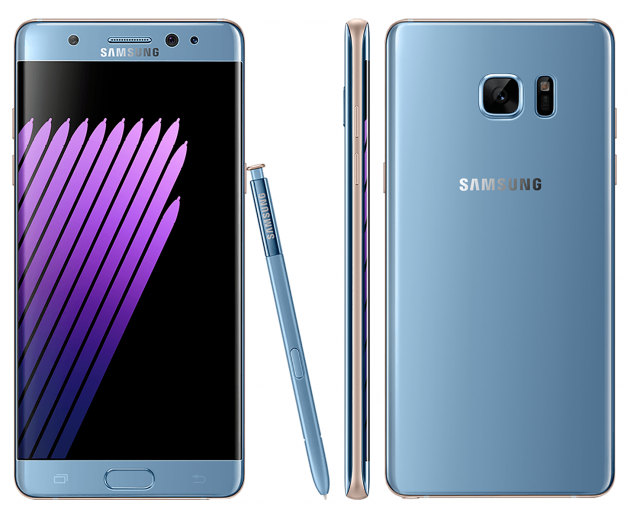 After being the subject of a multitude of leaks, the Samsung Galaxy Note 7 is now officially official.

While the Galaxy Note 7 may look similar to the Galaxy Note 5, there are a few subtle tweaks that make it a very different handset. First up is the display, which is a 5.7-inch 2560×1440 Super AMOLED screen like on the Note 5, but the Note 7â€™s display features dual curved edges. The addition of these curved edges means that the Note 7 gets the Edge UX software features found on the S7 edge. The Note 7â€™s screen is also covered by Corningâ€™s new Gorilla Glass 5.

The rest of the Note 7â€™s feature set is about what youâ€™d expect from a Samsung flagship in 2016. Itâ€™s got a Snapdragon 820 processor in the U.S., China, and Japan, while all other regions will get a Note 7 outfitted with an octa-core Exynos 8 Octa 8890 chipset. Also included is 4GB of RAM, 64GB of storage, a microSD slot, and a 3500mAh battery that supports fast charging over both wired and wireless methods. Rounding out the hardware features is a Dual Pixel 12-megapixel rear camera with OIS and a 5-megapixel front camera. All of those features are wrapped in a body thatâ€™s IP68-rated for water resistance.

Since this is a Note device, youâ€™re also getting an S Pen. This S Pen features a smaller 0.7mm tip and improved pressure sensitivity, and like the Note 7 itself, the S Pen is also IP68-rated for water resistance.

Finally, the Note 7 runs Android 6.0.1 beneath Samsungâ€™s custom user interface. That custom UI includes several software features, including Always On Display and Samsung Knox. There are several S Pen features, too, like the ability to quickly create GIFs using Smart Select and new Air Command features, including Magnify and Translate.

The Samsung Galaxy Note 7 will be sold in Black Onyx, Blue Coral, Silver Titanium, and Gold Platinum color options, though the gold model doesnâ€™t appear to be coming to the U.S., at least not initially. Samsung will launch theÂ Note 7 on August 19.

In the U.S., the Note 7 will be available from AT&T, Sprint, Verizon, T-Mobile, and U.S. Cellular. The big four will kick off pre-orders on August 3, while U.S. Cellular will start on August 4. No matter which carrier you buy from, youâ€™ll be able to choose either a free Gear Fit 2 or 256GB microSD card to go with your new phone. Additionally, T-Mobile subscribers will have the option of getting a free year of Netflix instead of the other two gifts.

Hereâ€™s what the Note 7â€™s U.S. carrier pricing looks like:

So now that itâ€™s official, what do you think of Samsungâ€™s Galaxy Note 7?