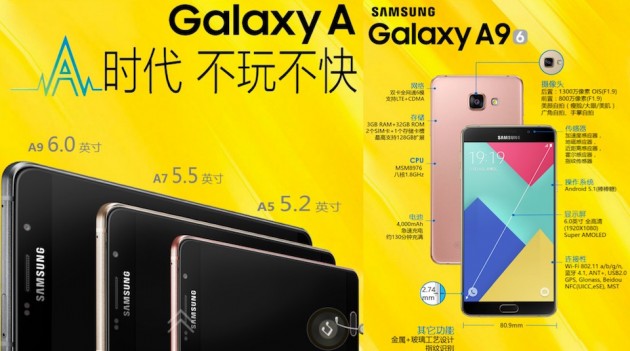 Samsung is one company that helped to make phablets a thing, launching the original Galaxy Note way back in 2011. Fast-forward five years and Samsung is still cranking out phablets, with the latest model being the Galaxy A9.

The Samsung Galaxy A9 has been officially introduced in China, boasting a 6-inch 1920×1080 Super AMOLED display thatâ€™s the largest in Samsungâ€™s Galaxy A family of devices. To compare, the Galaxy A3 has a 4.7-inch screen, the A5 has a 5.2-inch display, and the Galaxy A7 has a 5.5-inch display. One thing that the Galaxy A9 has in common with its Galaxy A siblings, though, is its Galaxy S6 styling, which includes a metal trim.

The Galaxy A9 is powered by an octa-core Snapdragon 652 â€” formerly Snapdragon 620 â€” processor thatâ€™s paired with 3GB of RAM. Itâ€™s got 13-megapixel rear and 8-megapixel front cameras, 32GB of storage, a microSD thatâ€™ll let you supplement that with additional storage, and both NFC and MST support for Samsung Pay. One other notable feature of the Galaxy A9 is its battery, which measures in at 4000mAh.

Samsung is planning to launch the Galaxy A9 in China, but thereâ€™s no word yet on how much itâ€™ll cost.

The A9 looks like an interesting phablet option for folks that are into those big devices. Itâ€™s not quite as high-end as the Galaxy Note 5, but its spec list is pretty respectable. And when you combine features like a 1920×1080 display and Snapdragon 652 with a 4000mAh battery, the Galaxy A9 should get some pretty decent battery life. So if you like phablets and want one with solid battery life, be sure to keep an eye out for the A9 in Chinaâ€™s shops or your preferred device import shop.