Samsung and Barnes & Noble launch the Galaxy Tab A NOOK for $139.99 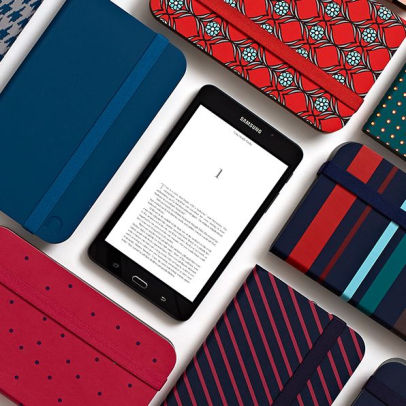 There are actually quite a few changes in this newest tablet compared to the device launched last year, starting with the display. Last year’s model featured an 8-inch 2048×1536 Super AMOLED display, which certainly helped it stand out. This year’s model hasÂ a 7-inch display with a resolution of 1280×800. Interestingly enough, this newest tablet is only running Android 5.1 Lollipop, but it does retain access to the Google Play Store, so owners can install Android apps, too.

The standard features are in place for a tablet that’s all about reading featuring content from Barnes & Noble, including eBooks, magazines and newspapers, as well as “B&N Readouts,” which will bring a daily refresh of book, magazine, and newspapers excerpts to get caught up on.

The specs for the new Galaxy Tab A NOOK include: 7-inch display, 4,000mAh battery, 8GB of built-in storage, a microSD card slot that supports cards up to 200GB, microUSB 2.0, a 3.5mm headphone jack, and Wi-Fi connectivity. There’s a 5MP camera on the back, and a 2MP front-facing camera on the other side.

The Galaxy Tab A NOOK doesn’t appear to support digital audiobooks just yet, as the official press release notes that support for that particular feature will arrive sometime in September, following a software update.

As far as release and pricing go, the Galaxy Tab A NOOK is available right now for $139.99 from Barnes & Noble’s website.

Do you plan on picking up Barnes & Noble’s new Samsung tablet?