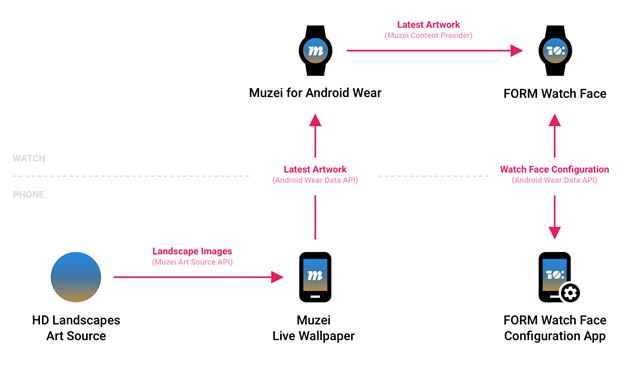 If the name Roman Nurik doesn’t ring a bell, he’s a design advocate for Google, and every time he decides to publish an Android app it seems to turn out a winner. His two previous apps that created quite a stir in the Android community are DashClock Widget and Muzei Live Wallpaper. Both are awesome, so you shouldn’tÂ expect the next to be less so.Â While not immediately useful to non-Android Wear users, Roman’s new FORM Watch Face demonstrates the power of Android as a mobile platform.

On the surface, FORM Watch Face is simple. You have several options of bright simple colors for the watch face background, and it displays the time with a typeface you may recognize that was developed for the FORM 2014 conference, a conference hosted by Google to discuss design and technology. The typeface is colorful and animated and you can add unread counts, the date, and seconds if you wish. It looks simple, but there’s so much more.

If you have Roman’s Muzei Live Wallpaper app installed on your phone, FORM Watch Face can use the same wallpaper that’s currently on your phone. This setting appears after you are using Muzei. If you’re not familiar with Muzei, the app rolls through different fine art, photos, or whatever extensionÂ you have installed on your phone.Â The typeface colors will change depending on the colors in the photo. It’s fun and beautiful to have the watch face change in different ways but still have the same simple, well-done information there for you to read.

How does this demonstrate the power of Android, you ask? Well, to get all this awesome on one tiny watch face, FORM Watch Face is actually using five different apps in one. We already talked about the FORM Watch Face App, Muzei Live Wallpaper, and extensions like Muzei HD Landscapes thatÂ Roman demonstrates the watch face with. There are two more that are also running in the background to make the magic happen: Muzei for Android Wear and the FORM Watch Face configuration app. The last two you don’t have to download, because they’re already there if you have FORM and Muzei installed. See the infographic below regarding how they interact.

Rather than paraphrase to explain the beauty of all this, I’ll let Roman tell you himself:

If you think about it, Android lets you actually blur the line between â€œappâ€ and â€œplatform.â€ Android apps are just bags of pluggable components: UI screens, launcher icons, background services, content providers/consumers, event listeners, etc. In fact, much of the Android OS itselfâ€Šâ€”â€Šthings like the system status bar, home screen, calendar data provider, etc.â€Šâ€”â€Šare just a bunch of crazy integrated components neatly sorted into bags we call â€œsystem apps.â€ When you start mashing the components of your app together with those of other apps in interesting ways, opening your components up to other developers, a lot of cool things can start to happenâ€¦ not only for your users, but for the countless users of apps that integrate with you. Pretty awesome if you ask me.

I’m not a developer, but I agree with RomanÂ who also said, “No other platform to my knowledge offers this kind of depth in app integration.” Good stuff. You can check out Roman’s new watch face by following the app and readÂ Roman’s post about FORM Watch Face via the links below.

What do you think of the new FORM Watch Face? How do you feel about the power of the Android platform? Are you already running Muzei? Let us know your thoughts by commenting below!