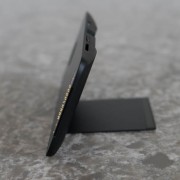 Dustin reviewed the Droid Z and Droid Z Force from Lenovo (Moto), but we wanted to take a deeper dive on each of the “Moto Mods” given that they are the major differentiator for this new lineÂ from Moto. Today we are going to take a look at the priciestÂ of the current Moto Mods, the Moto Insta-Share Projector, which Verizon let us put through its paces for the last couple weeks.

As the name suggests, the Moto Insta-Share Projector is a pico projector that allows for quick sharing on any nearby surface. Like the rest of the Moto Mods, it magnetically attaches to the back of the Droid Z or Droid Z Force and relies on the proprietary connector to pass data between the two. While we have seen our fair share of pico projectors over the years, the Moto Insta-Share Projector represents an ease of connectivity and sleekness to the overall package that far outstrips any other offering to date.

The Moto Insta-Share Projector offers a minimal design with just a power button, focus ring, articulating stand, USB Type-C port and, of course, the lens itself.

While it unquestionably adds some bulk to the phone at 11mm thick (more than double the thickness of the phone itself), the Mod is tapered at the top and bottom, makingÂ the entire kit comfortable to hold. When first picking it up, the Mod is surprisingly light given its size relative to the phone, but with just an 1100 mAh battery, there is precious little going on inside. I canâ€™t imagine opting for the Insta-Share Projector as your daily carry with the Droid Z, but sticking with it for a few days wouldnâ€™t be an issue.

A notable exclusion from the device are speakers. You are dependent on the output from the phone itself unless you opt to connect a speaker via Bluetooth. (Remember, there’s no 3.5mm audio jack on the Droid Z devices.)

Regardless of itsÂ weight, the device still feels well-built and should hold up just fine to normal wear and tear. It comes with a simple cloth case which should be plenty to keep it safe when not in use.

The Moto Insta-Share ProjectorÂ offers an 1100 mAh battery which Motorola claims should add an extra hour beyond the 2600 mAh (Droid Z) or 3500 mAh (Droid Z Force) of the phone itself. In my time with the Droid Z Force and the Moto Insta-Share Projector I experienced between 3-4 hours of projection time in a dark environment before the phone would hit low battery and disable the projector. That number dropped significantly in a well-lit room with approximately 90 minutes until the projector would shut down.

Itâ€™s important to note that the projector first depletes its own battery and then begins to draw from the phone itself, both battery levels are displayed in the notification bar when the projector is in use. You can opt to charge either the phone or the projector by plugging directly into one or the other and the charger included with the phone will charge both simultaneously, but donâ€™t depend on that working with 3rd party chargers as it was hit or miss in my experience.

The Moto Insta-Share Projector can output up to a 70-inch image at a resolution of 854 x 480, which longtime Android fans might remember as the mind-blowing resolution of the original Motorola Droid back in 2009. Today that resolution feels quite a bit less impressive as our smartphones (including the Droid Z line) are now at Quad HD (2560 x 1440) and beyond. With that said, I still found myself pleasantly surprised by the image from the projector in darker environments.

The resolution is considerably less of a concern to me than the brightness of the image, which falls apart quickly in a well-lit environment. That isnâ€™t much of an issue for those that are looking to use this primarily as a business tool, as you can cater to the capabilities of the projector by using light-colored background slides and dark text which display well in reasonably bright light. Just remember that you are going to chew through battery quite quickly in full light, so for the sake of your phone battery and image quality, you are better off if you can dim the lights at least slightly.

If your job necessitates giving presentations in front of small groups or displaying images to clients, this seems like a relatively easy sell at $299. The Moto Insta-Share Projector simply doesnâ€™t have any realistic competition when it comes to thisÂ size and ease of connectivity. You will pay another $50-$100 for superior image quality, and it will be in a package at least 4-5 times larger and necessitate the use of cables and adapters.

For those that are looking at this as more of a novelty, itâ€™s really a question of whether $299 is a significant expense for you. Itâ€™s a fun gadget to have around, becauseÂ you can be displaying an image or video on a nearby surface in just seconds, but itâ€™s hardly a necessity and there are numerous environments where using it is impractical.

The biggest catch with any of the Moto Mods is that they are only compatible with two phones at the moment. Lenovo has confirmed that theyâ€™ll be compatible with at least two generations of the Z line, so if you like the concept, youâ€™ll be good with these mods through at least one more round of Droid Z smartphones.

Moto has already hinted that more Moto Mods are coming at IFA as well, so this is a concept that they have invested in heavily. If you are the sort of person that swaps phones every year, the Mods might be a questionable purchase, but if you stick things out for 2-3 years, this doesnâ€™t seem like much of a concern.

While I wouldnâ€™t go building my home theater around it, the Moto Insta-Share Projector makes for a fun timeÂ for a quick and easy movie solution while on the road, camping or even in the backyard. And naturally, it can display anything on your screen, so you could also use it for a big-screen Android gaming experience (if paired with a controller) or share some photos or videos with the family without passing the device around.

Business users will net the biggest return out of Moto Insta-Share Projector, but after a couple weeks with it, I can assure you that you will find plenty of opportunities to use it for other purposes if you can justify the initial cost.