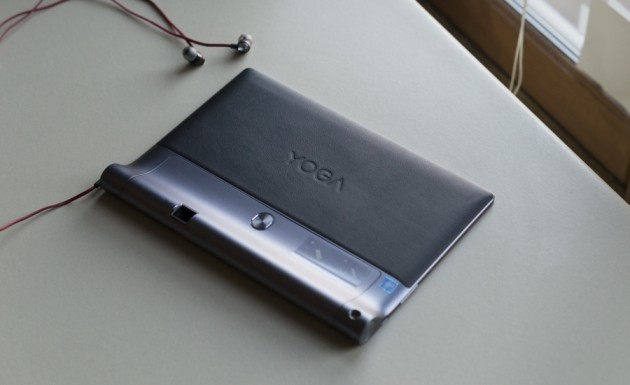 Working in the Android blogosphere, I’ve had the opportunity to review quite a few devices. Yet, the company that continually ceases to impress me is Lenovo. While most other companies follow tried and true formulas for new devices, Lenovo has continued to innovate and try new ideas. Do these concepts always work? No, but that’s part of the beauty of Lenovo. It’s a company that’s not afraid to take risks.

The Lenovo Yoga Tab 3 Pro is Lenovo’s latest Android tablet, and one of the most interesting to date. Like its predecessor, it features a host of multimedia capabilities, including a surprisingly good sound set-up and the remarkable addition of a built-in projector. What do all of those interesting features add up to in a tablet? Read on to find out.

For the multimedia features, you’re looking at four front-facing JBL speakers that are utilizing Dolby Atmos technology for loud, crisp sound. Lenovo has also outfitted the Yoga Tab 3 Pro with a built-in projector that features a brightness of 50 lumens and a projector image size of up to 70 inches.

As far as hardware goes, the Lenovo Yoga Tab 3 Pro has you covered.

Lenovo’s past tablets have excelled in terms of design and build quality, but the Yoga Tab 3 Pro takes that fame even further. The device still features that classic Lenovo design with a cylindrical battery and kickstand, but it swaps out the textured plastic back for faux leather, which adds an air of refinement. The faux leather is also far more comfortable to grip than the bumpy, textured plastic.

The distinctive kickstand still features a number of different poses, including the interesting ability to hang on a hook. This may initially be a little baffling, but it has some uses. You can use it to comfortably watch a movie without a solid surface to place the tablet on or you can use Lenovo’s eFrame software, which allows the Yoga Tab 3 Pro to become a digital picture frame or calendar. The calendar features gorgeous landscape photos and actually has some use, as well as being aesthetically pleasing.

As far as build quality goes, I wouldn’t be worried about the Yoga Tab 3 Pro. It feels sturdy and well-constructed, with no creaking or flexing in the body. The size of the tablet also aids in the build quality, as it’s much smaller than its predecessor, making drops less likely.

Cheers to Lenovo for continuing its tradition of excellent design and build quality.

Sharp though it may be, the display on the Lenovo Yoga Tab 3 Pro could still use a bit of work. Whites are a little tinted, and colors are saturated, but slightly off. Blacks are actually quite deep for an IPS display, and pleasantly enough, we couldn’t find any light bleeds on our unit, which has been a problem for some of Lenovo’s past tablets.

While the display may not be perfect, it’s very sharp and is perfectly decent for viewing movies, pictures and other content.

Lenovo has had a rough time with software in the past, but with the Yoga Tab 3 Pro, the company finally seems to be listening and has held back a bit on the software. Past versions have been heavy with customization, which led to a lot of lag and slowdowns. This new software still has some problems with bogging down, but it’s less heavy than past software and also looks much nicer.

Lenovo may still be better off just ditching its own software and going with stock Android, but if it can work on the performance optimization and make the UI a little more cohesive, we might able to accept that as a compromise.

As one downside, the Yoga Tab 3 Pro is running Android 5.1 Lollipop rather than the newer Android 6.0 Marshmallow. LenovoÂ doesn’t have a great track record with timely updates, so if you prefer to have the latest and greatest software, you may want to look elsewhere.

As mentioned in the software section, the Lenovo Yoga Tab 3 Pro does have a performance bugs. During some animations in Lenovo’s custom software, the device will lag or stutter. Most of these seem related to Lenovo’s software customization rather than to the hardware or OS itself. As far as specs go, it should be quite capable of handling itself without lag, as long as it’s properly optimized by Lenovo.

A little more work and Lenovo could have a very powerful tablet on its hands.

With Lenovo’s past tablets boasting impressive battery life, we expected a lot from the Yoga Tab 3 Pro. Fortunately, it delivered. Lenovo estimates about 18 hours of usage time, but we were able to stretch that to about 20 hours without a problem. The Yoga Tab 3 Pro brings in a 10,200mAh battery and, as an added bonus, it does support fast charging, which significantly reduces the amount of time needed to get a charge.

Keep in mind that using the built-in projector is going to burn through more battery. But if you’re running low, it’s easy to fill back up again with the fast charging. All in all, Lenovo has once again delivered solid battery performance.

Not a category that we usually use in reviews, this one is for devices like the Yoga Tab 3 Pro that bring in unique features for multimedia. The sound on the Lenovo Yoga Tab 3 Pro is something special, with the device delivering very crisp sound, even at high volumes. Even more impressive than the crispness is the actual volume of the speakers. The four speakers can get rather shockingly loud, making a perfect companion for the projector, as you likely won’t have to worry about using external speakers to make sure everyone can hear.

The built-in projector is the other unique feature and while seemingly odd, it’s actually full of uses. Not only can the projector make it very easy to watch a movie with friends, but it also has more practical applications for the professional world. It’s quite easy to run through a PowerPoint or slide show on the Yoga Tab 3 Pro, and the projector gives you a simple and portable way to display it to others. Very handy, indeed.

Lenovo has spent the last couple of years creating interesting devices and then refining them based on feedback. The Yoga Tab 3 Pro is the latest step in the refinement process, and it shows significant improvements over its predecessors. It’s faster, sleeker and more functional than previous models. It’s continued to take the unique core elements of Lenovo’s tablets and develop even more uses for them.

These refinements ultimately lead to a better experience for the user, which is the end goal. As it stands, Lenovo can continue to refine a few things, but the company is headed in a very good direction with the Yoga Tab 3 Pro.

Lenovo usually lists the Yoga Tab 3 Pro for $499, but is currently sold out on its website. Best Buy, however, does have the device in stock for $449.