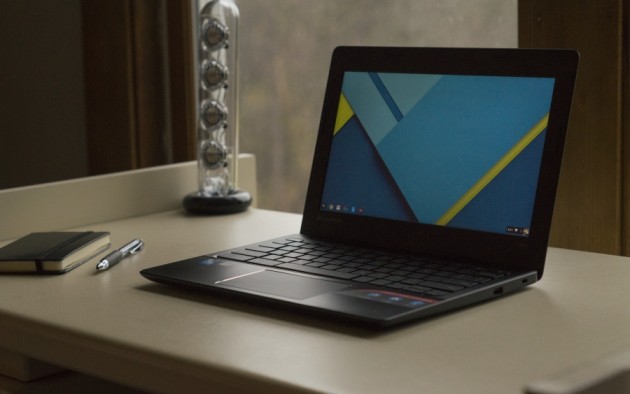 Chromebooks have always been an area of interest. The concept of the Chromebook took cues from the failed wave of netbooks and went for portability and low price. But rather than pairing that with a traditionally more intensive operating system like Windows, Chromebooks were outfitted with Chrome OS, Google’s ultra-light operating system that revolves around web browsing and taking full advantage of the cloud.

In the time since Chromebooks came into being, a whole host of companies have created Chromebooks. Some have been great, while others have been flops. Now Lenovo is taking another step into the Chromebook game with its newest model, the Lenovo 100S Chromebook.

Lenovo has designed the 100 S Chromebook to be an extremely affordable Chromebook option that arrives just in time for the holiday shopping season, when hordes of shoppers will be searching for deals wherever they can find them. As such, the 100S Chromebook is priced as low as $179 for the base model.

The Lenovo 100S Chromebook was designed to be easy on the wallet, and the modest specs reflect that. Lenovo has outfitted the 100S Chromebook with a an 11.6-inch LED display with a resolution of 1366×768. Inside, the device has a dual-core 1.6GHz Intel Celeron N2840 processor, 2GB DDR3 RAM, Intel HD graphics, 16GB of flash storage, Wi-Fi, Bluetooth 4.0 and a battery that lasts for an average time of about 8Â hours.

All in all, the hardware of the 100S Chromebook is humble, but that’s expected at its low price point.

The Lenovo 100S Chromebook is geared towards a budget market, so we expected some compromises. The build quality is one of them. The device is primarily made of plastic, with a very light texture on the exterior. It did well enough at resisting fingerprints, but unfortunately, it’s extraordinarily scratch-prone.

Seemingly anything scratches the plastic on the lid of the 100S Chromebook. Even putting it into a neoprene laptop bag with its charger left it with scratches. If you try it, you could likely scratch the lid with your fingernail. While thisÂ doesn’t cause any usability issues, it certainly makes the device feel much lower quality when it accumulates scratches so easily.

With the lid opened, the design isn’t too bad. It’s basic, but that’s expected with the price. Nicely enough, Lenovo has put in an aluminum palm rest, which makes the 100S ChromebookÂ significantly more comfortable to use. The trackpad is plastic, but it’s pleasant enough to use and didn’t seem to have any noticeable quirks. The keyboard features a surprising amount of spacing between the island keys. The keys have an acceptable amount of travel, though they make a rather loud clicking sound. As a whole, the keyboard is fine. It’s not going to win any awards, but it’s much better than the keyboards found in many laptops in this price range.

Lenovo put a fairly standard display on the 100S Chromebook, and you can tell when you’re using the device. Small text and icons can be a bit fuzzy, but most things are perfectly readable, though you shouldn’t expect too much sharpness. Colors are fine; a bit bland but not too distorted. Whites have a tendency to be overblown and blacks aren’t terribly inky, but again, the quality is perfectly acceptable for the price range.

As far as brightness goes, you might have a bit of a problem when using the device in bright sunlight, but for indoor use, you’ll be fine.

Software has never been Lenovo’s strong point, which is why we’re glad that the company used stock Chrome OS for the 100S Chromebook. Chrome OS is incredibly simple and easy to use, with nearly everything taking place through Chrome and its apps and extensions.

If you’re considering a Chromebook, you may want to take a quick tour of the Chrome Web Store to get a feel for what’s out there. And if you’re planning to work with documents, spreadsheets and other office functions, spend some time getting used to Google’s suite of office apps as well as Google Drive, as they’ll likely be your mainstays when using a Chromebook.

As a whole, Chrome OS is surprisingly full-fledged, with a surprising amount of capabilities for a web-based OS. It may take a little getting used to for some users, but it shouldn’t be hard for most peopleÂ to pick up.

Chrome OS is designed to require minimal hardware to run on. As such, even the low-end hardware found in the 100S Chromebook is good enough to offer decent performance. During my usage of the device, I didn’t run into many slowdowns, even when loading rather complex web pages. Some apps may give the 100S some trouble, but for most everyday usage, you won’t have a problem thanks to Chrome OS’s fantastic optimization.

As far as web browsing and simple tasks are concerned, the 100S Chromebook can handle itself without a problem.

The battery on the 100S Chromebook is quite good, getting an average of about 9Â hours of usage during my testing of the device. Lenovo rates the battery as good for 8Â hours of usage, so an even better real world performance was a pleasant surprise. Lenovo has always been good with batteries in its devices, and the 100S Chromebook is no exception, making it a great choice for those who are often away from an outlet.

Lenovo’s goal with the 100S Chromebook was to create an affordable, portable laptop for the holiday season. The company has reached that goal with a device that, while average, is a great choice for those looking to get a laptop at a great price.

Our only real complaint about the Lenovo 100S Chromebook is the build quality and how easily the device scratches. That, however, is more of stylistic issue, rather than a problem with the functionality. Functionally, you’re getting a lot of bang for your buck, and plenty of people would be more than happy to unwrap a Lenovo 100S Chromebook during the holidays.