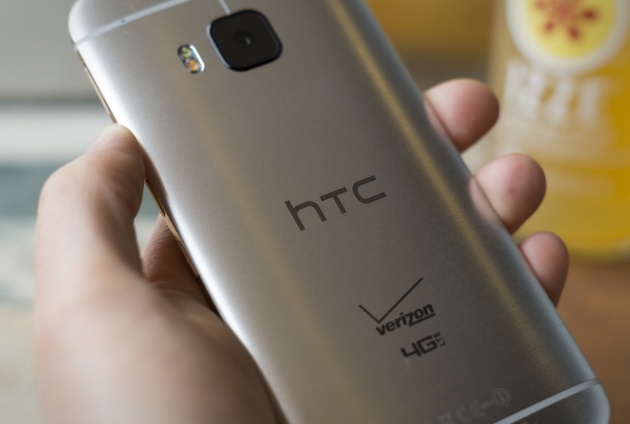 HTC is a company that’s had a mixed big of fortunes. While it’sÂ received high critical praise on several occasions, it’s also struggled to combat declining sales and shrinking profit margins. HTCÂ found a vein of success when it introduced the HTC One M7, the first in a line of high-quality flagship devices that placed an emphasis on design. The second iteration, the HTC One M8, fared even better than its predecessor. For 2015, HTC has introduced the third One flagship, the HTC One M9.

The hardware in the One M9 is well up to the job of flagship.

HTC has long excelled at designing phones, and the One M9 is the next in a long line of devices that feature premium build quality. The entire phone is encapsulated in a dual tone metal unibody that, on our model, features silver as the primary color with a gold accent color around the edges of the device. If you’ve used an HTC One M8, the device will feel familiar to you as the two share most of the same design.

The One M9 has moved the power button to the right hand side of the device, which negates the One M8′s problem of being too tall to wield. The build quality is solid and the design in and of itself doesn’t have any problems.

What the One M9 didn’t do is set the bar higher. The design of the phone features so little change that it could easily be confused for a One M8 at first glance. While HTC played it safe, the company will need to advance the design significantly next year if it hopes to remain competitive.

The display of the HTC One M9 is great. While it’s the same display that was used in the One M8, it remains bright, colorful and sharp. Whites are extremely white and while blacks could be a bit darker, they’re great for an LCD display. As an added bonus, the 1080p resolution sucks less battery life and requires less processor use than the QHD displays used by competitors.

As the creator of custom Android user interfaces, HTC has had a lot of experience with software. The HTC One M9 comes pre-loaded with Sense 7, HTC’s custom UI that still ranks at the top of the list for manufacturer UIs. The design is clean, modern and intuitive while performance remains just as good as it would be on stock Android.

Sense 7 also includes welcome additions such as BlinkFeed, which aggregates your social networks into a single stream, while also allowing you to throw in news stories from your favorite sources. It’s an easy and pleasant way to browse through lots of content without having to go through multiple apps or websites.

For software, HTC gets a thumbs up.

As a flagship device, the HTC One M9 is expected to have great power. Happily, it fulfills that request and packs a serious punch in performance flying through every task you throw at it. Whether it’s gaming, web browsing or simply switching between lots of apps, the One M9 handles it like a boss. And while it’s good in real world use, you can see from the table below that it also performs well in benchmarks.

If you’re looking for a high performance phone, the One M9 delivers.

HTC has done a lot of experimenting with the cameras on its devices, but it has yet to really hit it out of the park. UltraPixels were an interesting idea, particularly with their boosted low light performance, but their lack of resolution and the harsh processing that accompanied them made them ultimately fail.

The 20-megapixel camera in the HTC One M9 isn’t bad, per se, but it’s also not good enough to give it any “wow” factor. Pictures come out sharp with decent brightness and colors, but the quality is never enough to set it apart or even above its competitors.

That being said, the quality will be fine for most people and the camera is fast and easy to use. While it doesn’t make the top of our list for smartphone cameras, it’s not too far down, either.

Battery life is a key part of smartphones that is often overlooked by manufacturers. The HTC One M9 has fair battery life. The 2840mAh battery will get you through the day, but don’t expect it to last overnight. If you’re a heavy user, you may even need to charge it up by 6:00 PM or so. For screen-on time, you can expect around 3-3.5 hours, which is fairly average for most flagships.

The real downside is that the One M9 doesn’t feature any sort of quick charging technology, unlike many of its competitors. If you’re running low on battery, it’s going to take you a lot longer to fill up than just a quick half-hour charge.

With the One M9, HTC took the cautious route and didn’t make any major revisions to its tried and true One formula. That move played against the company as the One M9 is good, but doesn’t feature anything to set it apart. It feels much the same as last year’s model and its one major change, the camera, ended up being less of a success than HTC likely hoped for.

Nonetheless, the HTC One M9 is a perfectly capable phone that should satisfy the demands of most people. Don’t mistake it for a bad phone, because it’s a very good phone. It’s just not good enough to put it at the top of our list.