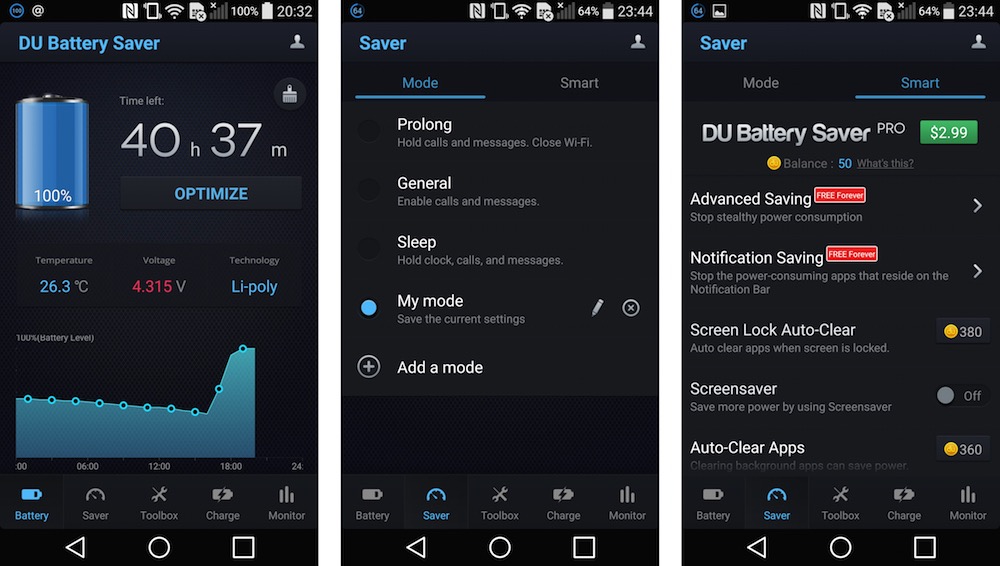 As we begin to move more and more of our day-to-day computing to our smartphones â€” from calls, texts, emails, social networking, to web browsing, gaming and â€˜real work’ productivity â€” and as our smartphones get more technologically advanced â€” with multiple core processors, UHD screens, LTE and NFC chips and more â€” it has been hard for battery tech to keep up (and thatâ€™s not to mention the fact that our phones seem to get thinner almost every year, leaving less room for battery capacity).

Because of this, it has become increasingly important for app developers to ensure their apps are as power-efficient as possible in order to reduce the drain they have on your battery. However, you canâ€™t always rely on third-parties to have your battery interests in mind, so it is useful to have a power management app like DU Battery Saver on your device to optimize your app usage and squeeze out a few more minutes of battery life.

DU Battery Saver purports to save you battery life in a few ways. The app can, at the press of a button, find and solve battery draining problems in the background. It can also be used to set and implement battery management modes that adjust your deviceâ€™s settings in order to preserve battery life. And lastly, it can help you charge your device more efficiently to ensure the long term health of your deviceâ€™s battery. Iâ€™ve been testing out DU Battery Saver for a couple of weeks now to see if it lives up to these claims.

When you first open DU Battery Saver, you are greeted with a screen that illustrates your remaining battery lifeÂ based on your current battery percentage and your settings. Youâ€™ll see a prominent â€˜Optimizeâ€™ button that quickly cleans up background processes and battery hogging apps in one tap thanks to DUâ€™s â€˜Aurora Engineâ€™ â€” a widget which has the same function is also added to your homescreen and an accessible button in the notification bar, both of which can be removed in the settings if you wish. This is the easiest, most hassle-free way to use DU Battery Saver and each time you hit optimize youâ€™ll be shown how many additional minutes of battery life you have gained â€” in my testing, this ranged from 10 to 50 minutes, depending on which apps I had been running. In the Monitor screen, you can also quickly see a list of all your apps and system processes and stop them individually. Annoyingly, there are some apps that are stopped only to be present again in the next scan moments after. This suggests that any background processes are soon restarted despite them being forced to quit.

There are more advanced ways to use the app, though, and these can yield even more impressive results.

My favorite feature of DU Battery Saver is its ability to set battery â€˜Modesâ€™. These are pre-set collections of settings â€” and you can create and customize your own â€” that you can quickly toggle on and off. For example, you can have one mode that has a 15 second screen timeout, 10% screen brightness with Wi-Fi and Bluetooth off if you are at work and wonâ€™t be using your phone much other than the odd call or text. Whatâ€™s better is that you can have multiple modes and schedule them for different times of the day depending on your own personal usage patterns or by power, so they switch on if your phone battery drops below a certain point.

The last, and in my opinion least useful, feature is DU Battery Saverâ€™s healthy charging screen. It advises you on how to best charge your device in order to prolong your batteryâ€™s life, but I personally just throw my phone on charge over night regardless of its percentage (I know itâ€™s not the best for the batteryâ€™s longevity, but who has time to figure a schedule for charging their phone battery in the most efficient way?). If youâ€™re into that kind of thing, you might find it more helpful â€” particularly its charging record that keeps a diary of how well you charged your phone each day.

For power users (no pun intended), there are more ways to customize DU Battery Saver to work best for you such as in the appâ€™s settings where you can whitelist certain apps so that they never get closed in the background, and add reminders or do not disturb settings. And you can also personalize the app experience with skins, if thatâ€™s your bag.

Some of the features described are locked in the free version and can either be accessed by purchasing the PRO version for $3 or by downloading recommended apps from within the free version in order earn virtual coins to spend in the app. It feels like a strange implementation as there are ads for other apps cluttering up many of the pages and screens you see â€” Iâ€™d much rather just have a simple in-app purchase for the extra features. However, it does mean that you can get the full benefit of DU Battery Saver for free if you donâ€™t mind seeing ads and downloading a few suggested apps.

If anything, DU Battery Saver has helped me more accurately assess which apps are the biggest hogs on my device and given me an easy way to reclaim some of that battery life. The UI isn’t the most clear at times, but itâ€™s a useful tool in your app arsenal and even if you only use it and gain an extra half hour on top of your usual battery life, thatâ€™s surely worth the low price of free.