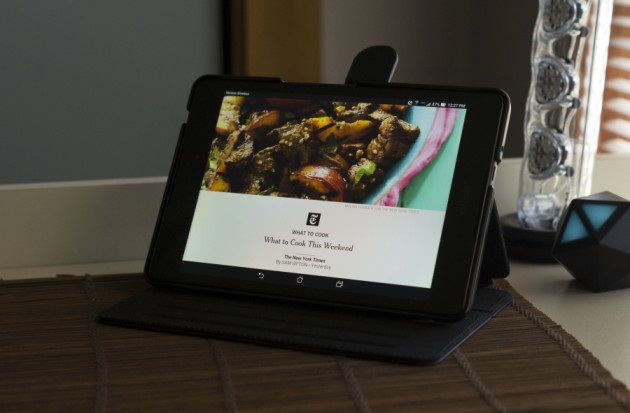 When the iPad was introduced, it launched a wave of frenzy in the tablet market. Consumers began scrambling for tablets, while manufacturers that were caught off-guard worked to catch up. During that period, a whole host of hardware and software concepts were launched, giving us some unique devices as well as a great deal of flops. In particular, the Android tablet market took a while to really catch its breath and stabilize. Years have passed since then, and now there remains a vibrant selection of tablets that are certainly different from the early era.

One of these modern tablets is the ASUS ZenPad Z8. ASUS made its name early on with Android tablets, focusing on unique designs and occasionally baffling hybrids to set itself apart. These days, the company takes a more low-key approach, sticking with a standard slab design. The ZenPadÂ Z8 fits into that family, but it also offers the benefit of being connected to Verizon’s powerful 4G LTE network. But the question remains, is that enough for a great tablet?

Carrier-exclusive tablets generally aim just under the high-end market, and ASUS has followed that trend with the ZenPadÂ Z8. Here’s a rundown of the specs:

It’s not built to stun, but the ASUS ZenPadÂ Z8 offers decent value for customers who aren’t looking to open their wallets quite as wide.

Great design is often found in high-end devices, but it can easily be one of the first things to go when watching costs. The ZenPadÂ Z8 has a design that is functional and unremarkable, making it a perfect fit for an average device, but leaving it lacking any distinction that might give it extra selling power. The front is a black slab with slits for the speakers at the top and bottom. The back of the device is simply textured plastic with the ASUS logo plopped in the center.

A dark plastic band wraps around the edges, with a silver power button and volume rocker offering minor relief from the monochromatic color scheme.

While the design may be uninspiring, it’s functional and seems sturdy enough. We didn’t detect any creaking or flexing on our review unit, which shows that it’s at least built well. It may not win in a design contest, but the ASUS ZenPadÂ Z8 should be fine for everyday use.

ASUS has quite a bit of experience with displays, allowing the company to fare a bit better than other competitors in the mid-range market. For its price point, the ZenPadÂ Z8 has a great display, offering vivid colors, bright whites, and decently dark blacks. Additionally, ASUS has built in controls over the color temperature and range of the screen. Users can customize their own or choose from options such as Balanced, Vivid, and Bluelight Filter, which is a great option when using the tablet before bed.

One note to take into consideration is that ASUS enables Blur-Free Motion by default, which is designed to smooth video playback. The benefit of such a feature is debatable, and I found my self disabling Blur-Free Motion after just a few minutes of watching video.

For a $250 tablet, the ZenPadÂ Z8 delivers a surprisingly good display.

Software is often the downfall of many devices. Great hardware means nothing if the software doesn’t match it in quality. Fortunately, ASUS has spent a great deal of time working on its software, with the result being ZenUI, a smooth and intuitive overlay. The software on the ZenPadÂ Z8 is well optimized for the hardware, allowing it to zoom around tasks like a higher-end device.

ZenUI is also quite intuitive, making it easy for customers to get acquainted with their new tablet. There are a fair amount of pre-installed apps, but most of them serve a reasonable purpose, such as a File Manager and a Reminder app. Verizon also has a few of its own apps pre-loaded, which, unfortunately, can’t be uninstalled. Despite that, ZenUI remains quick, attractive and easy-to-use, making it the perfect tablet for those who aren’t naturally savvy with technology.

Great performance isn’t something we expect from a $250 tablet. But when it’s there, we certainly appreciate it. ASUS has done a great job of marrying the software and hardware together, leading to great performance through a number of tasks. While it can’t necessarily compete with flagship devices in the gaming department, the ZenPadÂ Z8 holds its own in everyday tasks such as streaming video, browsing the web and composing emails. Its prowess continues to extend to more intensive tasks, such as editing slide show presentationsÂ and working with spreadsheets.

Kudos to ASUS for creating a tablet that provides excellent performance at a great price.

In our testing of the ZenPadÂ Z8, we found the battery life to be acceptable, but not incredible. Generally, you could get through one to two days on a charge, depending on how heavy your usage is. A cellular antenna clearly draws extra battery life, but the battery on the ASUS ZenPadÂ Z8 isn’t significantly larger than comparable tablets, giving it simply average battery life.

If you’re a road warrior who needs a long-lasting battery, you may want to look elsewhere.

Being connected to a cellular network may draw extra battery life, but Verizon’s network makes it hard to resist. The carrier has worked hard to maintain great coverage and high speeds, allowing the ZenPadÂ Z8 to shine, even when away from Wi-Fi networks. HD video streams quickly, web pages load in a snap and streaming music is no problem at all. The best part is that Verizon’s network extends far and wide, making it rare to find yourself without coverage.

Looking for a tablet that’s constantly connected? The ZenPadÂ Z8 on Verizon may just be the tablet for you.

Not everyone needs a flagship tablet. Some are looking for a tablet that’s quick, easy to use and always connected. For that group of people, the ZenPadÂ Z8 is perfect. It can handle everyday tasks with ease and is linked up to the nation’s largest LTE network, providing you with constant access to the web no matter where you are. Best of all, it’s priced at just $250, giving it a fantastic value. With that kind of perk, is there any reason not to buy the ZenPadÂ Z8?