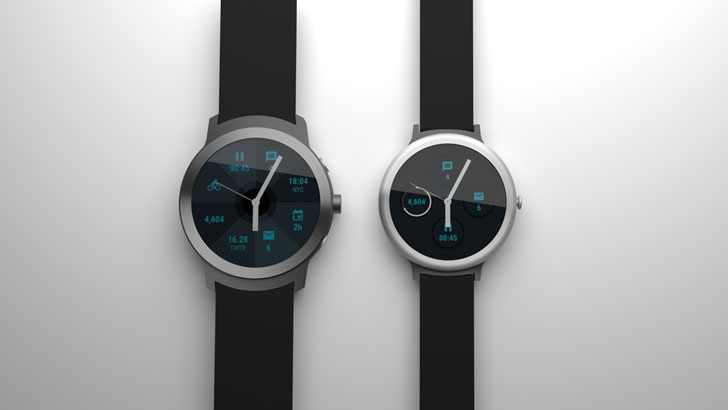 Rumor has it that Google is working on two Android Wear smartwatches of its own, and now we get to see a potential design leak. Keep in mind that these designs may be outdated, may be changed at any time, and areÂ recreations of the designs thatÂ Android Police saw. It’s possible thatÂ the final product will look different.

The bigger of the two is codenamed Angelfish and features a large body with a huge crown and two small buttons on either side ofÂ it. The watch will be standalone and will have both GPS and LTE connectivity. It lacks the flat tire found on theÂ Moto 360, which is a nice change.

Swordfish is significantly smaller, thinner, and sleeker than Angelfish. It has a black gap between the body and the display, which may house sensors. This makes the display slightly smaller than it looks. It features an oddball crown and no extra buttons. Unfortunately, it won’t have LTE, GPS, and potentially not even a heartbeat sensor. It might be a budget watch, hopefully cheap enough to undercut the current Android Wear manufacturers.

It’s not knownÂ what names these watches will be sold with. Nexus devices are usually made by other companies, so the Pixel brandÂ would make more senseÂ for themÂ becauseÂ they’reÂ Google’s own hardware. All we know is that they will launch with Android 2.0 and Google Assistant. What do you guys think of these watches? Do you look forward to what Google has in store for us? Leave a comment!