PokÃ©mon GO officially available for Android phones in the U.S. 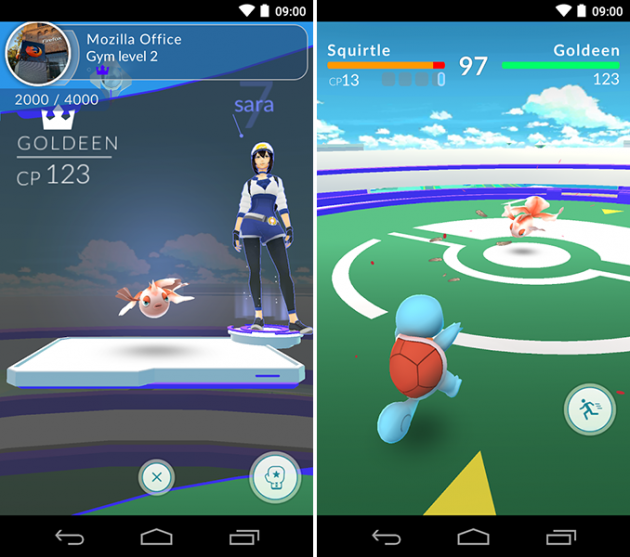 After hitting other parts of the globe last night, PokÃ©mon GO has officially made its way to the U.S.

PokÃ©mon GO is an augmented reality game that tasks you with walking around the real world and using your smartphoneâ€™s camera to find and capture PokÃ©mon. Youâ€™ll see PokÃ©mon randomly pop up on your smartphoneâ€™s display, though youâ€™ll have better odds of finding some PokÃ©mon at certain locations. For example, water PokÃ©mon will likely appear near a lake or ocean.

You can also join one of three teams and then battle your PokÃ©mon at gyms, which are also found in the real world. If a gym belongs to your team, you can help defend it. If it doesnâ€™t, you can fight to defeat the gym. There are also PokÃ©Stops in the real world that you can visit to buy PokÃ© Balls for catching more PokÃ©mon, and other items for your journey.

PokÃ©mon GO requires an Android smartphone with 2GB of RAM and Android 4.4 or higher. It wonâ€™t work with Intel Atom-based devices, and compatibility isnâ€™t guaranteed for Wi-Fi-only devices, tablets, or devices without GPS. The game is free-to-play, but there are in-app purchases thatâ€™ll let you buy PokÃ©Coins, which can be used to buy more PokÃ© Balls, an incense lure, and other items.

PokÃ©mon GO is made by Niantic Labs, which you may remember as the group behind Ingress. Because of this, you know that the game is coming from some folks with AR chops. PokÃ©mon GO looks like a pretty fun game, especially for anyone thatâ€™s played the Game Boy or DS games. If youâ€™ve got any interest in trying PokÃ©mon GO, visit the Play Store and give it a try!