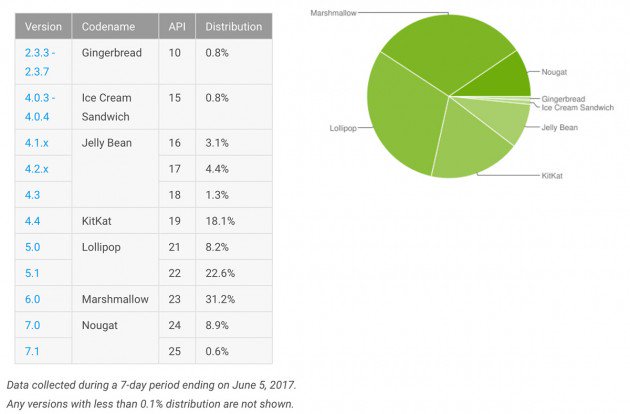 Googleâ€™s latest Android platform distribution numbers are in, and theyâ€™re just about what youâ€™d expect.

The June 2017 Android distribution stats reveal which versions of Android were used to access the Play Store during the seven-day period ending on June 5. During this time, Android Nougat (7.0 and 7.1) was present on 9.5 percent of devices, which is up from the 7.1 percent of devices that it was on last month.

Nougat usage continues to grow as we see new flagships released with Nougat in tow, like the HTC U11 and Samsung Galaxy S8, and as older devices get updated to 7.0. Thatâ€™ll continue throughout June, so donâ€™t be surprised to see Nougat usage climb into the double digits the next time that we report Googleâ€™s Android platform distribution stats.