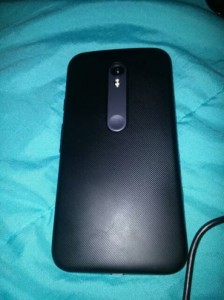 Summer is upon us, which means that it’s phone season for Motorola again. In addition to having a new Moto X on the way, Motorola is prepping a new Moto G. Now we know what to expect from this third generation Moto G, thanks to a slew of leaks. Unfortunately, it looks like the new Moto G will share most of its specs with last year’s model, leaving little incentive to purchase one.

The new leaks inform us that the 2015 Moto G will feature a 5-inch display, Snapdragon 410 processor, 1GB RAM, 8GB storage plus microSD card slot, 13-megapixel rear camera, 5-megapixel front-facing camera and 4G LTE support. Hardware-wise, the rear camera seems to be the main improvement, with the display and RAM remaining the same. That being said, a leaked Antutu benchmark shows a score of 23355, which is a notable improvement over 18249 for last year’s Moto G.

The back of the phone has a slightly-changed design, which now features an elongated oval of metal or plastic that links the camera and Motorola logo together. The new back panel is rumored to be a standard design for upcoming Motorola phones. On that same tangent, Reddit user MotoLeaks has said that the lack of changes in the Moto G is to try and direct customers to purchase a new DROID-branded phone that will feature much better specs and be priced around $300.

It looks like 2015 may not be the year to purchase a Moto G, particularly with multiple sources all confirming the same rumors. When Motorola officially announces the new Moto G, we’ll be sure to keep you in the know.