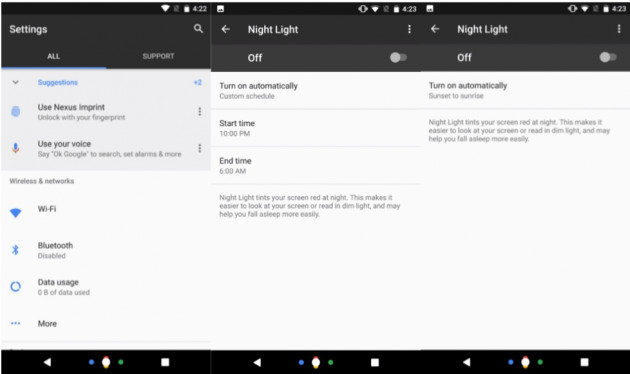 We’ve heard a lot about the upcoming Nexus devices, as well as theÂ Android 7.0 NougatÂ update that will be accompanying the devices. While we generally assumed that the Nexus devices would feature the same version of Nougat as everyone else, the latest leaks are pointing to some special software features that are reserved for the new Nexus devices. Let’s take a look at what these features entail.

First off, the Settings app will now be broken into two tabs, one for “All” settings and the other for “Support”. What does Support entail? According to Android Police, this feature will allow for live screen-sharing with customer support reps. If you’re having an issue with your device’s software, you can instantly contact a support rep who can see the issue at hand and then walk you through the steps to remedy it.

Night Light is another new feature for Nexus devices, designed to shut off blue pixels for better viewing at night. Night Mode was previously tested in the Android 7.0 Developer Preview before it was removed due to performance issues and bugs. But with Google controlling the hardware and software on the new Nexus devices, it’s been able to integrate Night Light into the devices at a lower software level, smoothing out the performance issues. Users can even schedule Night Light to turn on and off with the time of the sun’s set and rise.

The last feature detailed in this leak is a new gesture to activate Ambient Display. Ambient Display is a way to view the time, date, and notifications without turning on the entire display. In its current implementation, it’s activated by a new notification or by the user lifting up the phone to look at it. With the new gesture, it could be activated instead by double-tapping the screen while it’s turned off.

Google has made mention of its plan to make the Nexus devices more unique, and these are clearly some of the ways in which the company is working to attain that goal.

Any thoughts on Google adding special software features for Nexus devices only?