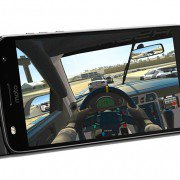 Along withÂ the Moto Z2 PlayÂ that was announced today, Motorola also revealedÂ four new Moto Mods, each of which is designed to improve the user experience in some way or another.

The first is a brand new Game Pad which connects to the Moto Z2 Play like any other Moto Mod, via the pins on the back of the phone. Once connected, the Game Pad offers a pair of sticks, a D-pad, four face buttons, and even a dedicated button to go Home. There are shoulder buttons as well. It will cost $79.99 when it goes on sale.

There is the new JBL SoundBoost 2, which now comes in three colors, has a fabric covering, and is nowÂ splash-resistant. It will work alongside a brand new app from JBL, which will allow owners to directly adjust the sound coming from the speaker. It will retail for $79.99.

The Motorola TurboPower Pack features quick charge support and a 3490mAh battery that charges the phone at 15W speeds. There is a USB Type-C port on the Mod itself which can be used to charge it to 50 percent battery life in just 20 minutes. Customers will get all of that for $79.99 when it becomes available.

And finally, there’s the Moto Style Case with Wireless Charging, which also supports quick charging at 10W speeds. As the name suggests, it means Moto Z2 Play owners can charge their phone wirelessly. It will be available in a variety of colors for $39.99.

What do you think of the latest Moto Mods?