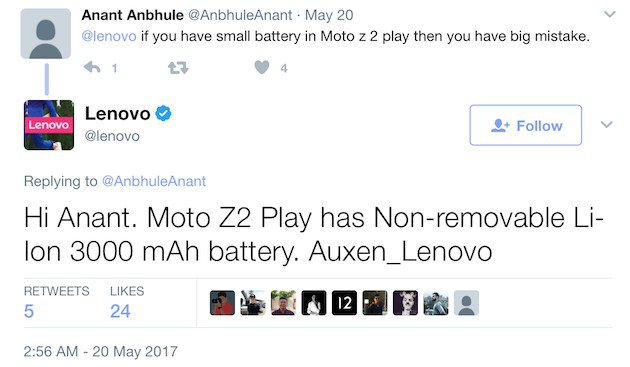 May has been a busy month for the still unannounced Moto Z2 Play, with the device having its specifications leaked and even getting a peek at what the handset will look like compared to its brethren.

Now the rumor mill is back at it again, dropping a few more tidbits regarding Lenovo‘s next Z smartphone. It starts with the official Lenovo Twitter account, which was more than happy to confirm to an inquiring mind that the battery in the unofficial Moto Z2 Play will measure in at 3000mAh.

Unfortunately, Lenovo deleted the tweet, which probably just goes to show the handset will indeed have a battery of that size. ButÂ the internet doesn’t let things go easily, and soÂ here’s the tweet anyway:

If that’s not enough for you, the Chinese regulator TENAA has put the Moto Z2 Play through its testing procedures and has published pictures of the device. What TENAA is showing off certainly lines up with what we’ve seen in the past, so it looks like fans of the original Moto Z Play’s design should be excited about what’s coming down the pipe.

TENAA also notes a few specs for the upcoming device, which will apparently feature a 5.49-inch OLED display with a 1080p HD resolution. There will be a 12-megapixel camera on the back and a 5-megapixel front-facing camera, and it’ll feature an octa-core processor, 64GB of built-in storage, and a microSD card slot, too. It’ll be running Android 7.1.1 Nougat out of the box.

As for when we might expect Lenovo to unveil the oft-rumored device, that still remains a mystery.

What do you think of the Moto Z2 Play?