Marshmallow usage grows in August, now up to 15.2 percent of Android devices 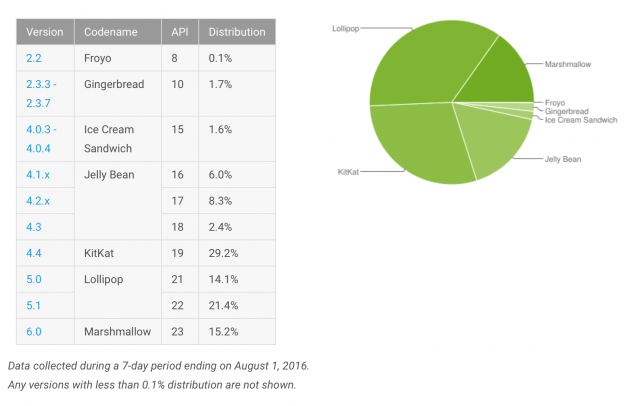 Google today shared its Android platform distribution stats for August 2016, which show the different Android versions that accessed the Play Store during the seven-day period ending on August 1. Unsurprisingly, Android 6.0 Marshmallow has grown again, going from 13.3 percent in July to 15.2 percent in August.

Rounding out this monthâ€™s stats is Gingerbread slipping from 1.9 percent in July to 1.7 percent in August and Froyo holding steady at 0.1 percent.

Marshmallow is the latest version of Android available to the public â€” for now, at least â€” so itâ€™s good to see it continuing to grow in usage. That growth should continue in the coming months, thanks in part to the impending launch of the Android 6.0.1-equipped Galaxy Note 7.