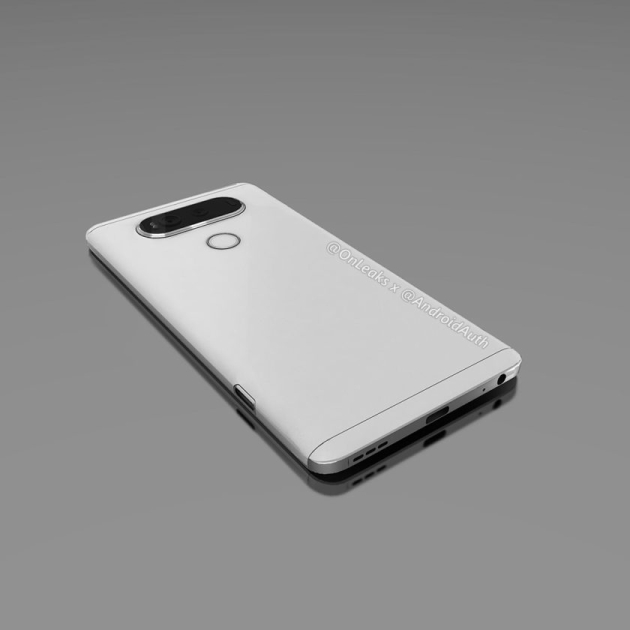 LG has been working to build hype around its upcoming V20 smartphone, the successor to last year’s surprisingly popular V10. The V20 is slated for release on September 6 and is set to be the first new smartphone running Android 7.0 Nougat. Other details have been murky, but now a few things have been cleared up with leaked renders that also raise some interesting questions.

On the front of the phone, we can see that the V20 remains the unique secondary ticker display from the V10. The V20 is also employing minimal bezels on three sides of the display, giving it a near-bezeless design. We can also spot a speaker on the bottom of the V20, residing next a USB Type-C charging port and a standard headphone jack, proving that LG isn’t ditching the 3.5mm jackÂ just yet.

These renders show a V20 that’s clearly drawing influences from the LG G5. The device features a similar metal design and may even feature the same modular design that the LG G5 toyed with. In the image above, you can see an extra button on the side and a segment on the bottom that could slide out, allowing users to change the battery, add a camera grip, and so on. In the same picture, we can also a sizable camera hump that will likely house dual cameras. Additionally, we can see the power button and fingerprint scanner resting on the rear of the device.

The V20 is reportedly sporting a thickness of just 7.7mm, with an extra bit of thickness at the camera, bumping it out to 8.8mm. The device is also narrower than the V10 due to those slim bezels. Specs remain unknown, but we should expect to see flagship-quality hardware inside the V20.

While the LG G5′s experimental features didn’t quite click with customers, LG isn’t giving up on some of the ideas. By bringing a dual-camera set-up and a possible modular design to the V20, the company is clearly hoping that customers will see the benefits offered by such features.

What are your thoughts on the LG V20? Yea or nay?