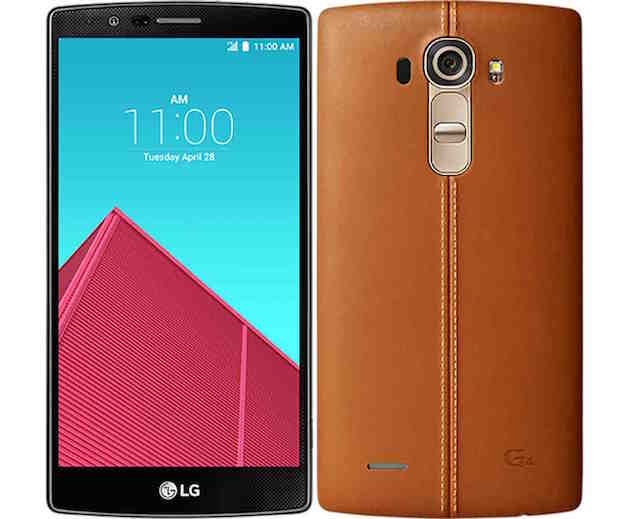 As previously scheduled, LG took the stage on Tuesday, April 28, and finally took the wraps off the oft-rumored and highly-leakedÂ G4. The next flagship smartphone holds plenty of similarities to its predecessor, the G3, but the changes that LG has made â€” both aesthetically and under the hood â€” will more than likely make this a must-have smartphone for many potential buyers.

First and foremost, the LG G4 features a 5.5-inch display, and it’s running Android 5.1 Lollipop under the hood. That display features what LG calls “quantum dot technology,” which the company boats will make colors on the G4 look much better than they ever have before on a smartphone. The resolution of the Quantum display is 2560×1440, and powering the whole show is a Qualcomm Snapdragon 808 processor. There’s a removable 3000mAh battery, 32GB of built-in storage with a microSD card slot, and 3GB of RAM.

One of the main features is the 16MP camera on the back of the G4, with an f/1.8 aperture, included with Laser Auto Focus and optical image stabilization. The software is meant to give a bit more power to the user, including a manual mode that will let owners adjust the shutter speed, white balance, and ISO. The front-facing camera is an 8MP shooter.

The LG G4 will also feature LG’s proprietary UX 4.0, which LG says was built with a consumer focus. Specifically, LG was constantly asking, “How does this improve the customer experience?” Wit that in mind, LG also added plenty of pre-installed software bits that are meant to, in one way or another, offer a suite of extras to the user. That includes Smart Bulletin, which will gather notifications from a variety of applications on the device and display them all on a single page. There’s Quick Help, which is meant to help users with any questions they might have about the G4. Gesture Shot will let the owner take a series of selfies and pick the best one, while Quick Shot will let owners activate the camera quickly just by tapping the volume down button twice.

LG and Google have also worked together to provide 100GB of free cloud storage for G4 owners.