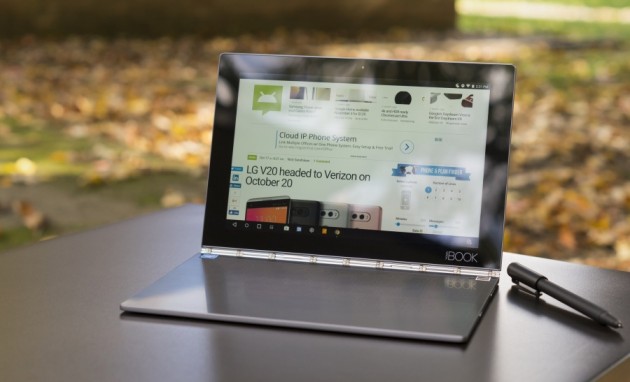 The question echoes through the room as a curious passerby inquires about the black slate resting on the table.

â€œOh, no, this is an Android tablet. I think itâ€™s made by Google or something? Maybe Samsung?â€

With a glut of near-doppelgangers filling the tablet market, the need for innovation has never been greater. The market needs devices that will stand apart, offering unique and diverse features that deliver benefits unduplicated by a myriad of competitors. It is at this moment that Lenovo is stepping up to the plate and taking a mighty swing with the Yoga Book.

Years of experience fill Lenovoâ€™s rÃ©sumÃ©, highlighting previous tablets and various ploys to stand out from the crowd. With a dire need for a unique tablet, Lenovo is combining its previous experiments into a single brainchild, the Yoga Book.

Not wholly a tablet, the Yoga Book draws inspiration from laptops, tablets, and a host of hybrids that have dotted the landscape. The result is a wild amalgamation of technology that connects hardware and software, traditional and modern, bringing it together in a package that shouldnâ€™t work, and yet excels far beyond expectations.

The design of the Yoga Book is sleek, progressive, astonishing, and simultaneously, remains comfortably familiar. With a clamshell design inherited from laptops, the Yoga Book welcomes the user gently, whisking away trepidation of new technology and softening the fact that it is an entirely different breed of device.

As usage begins, one quickly begins to realize that this is no common tablet. The hardware is most similar to Microsoftâ€™s Surface Book, with a 360Â° degree hinge that converts the Yoga Book from a laptop-esque device into something far more reminiscent of a traditional tablet. While the weight is slightly greater than most tablets, Lenovo has engineered near-perfect weight distribution, eliminating any discomfort when holding the device.

Lenovoâ€™s chosen design is simple, functional, and embodies the beauty of minimalism. Simple, gray plastic surrounds the device, as a way to improve durability and maintain a reasonable weight. The only adornments are a small Lenovo logo and the stainless steel hinge of the device that highlights the Yoga Bookâ€™s focus on functionality.

Perhaps most striking is Lenovoâ€™s Halo Keyboard, which opens the door to a multitude of new opportunities. While the Halo Keyboard is a hardware keyboard, key travel is nowhere to be found. Lenovo has integrated the keyboard into an entirely flat surface, illuminating when in use, and even providing variable audible and haptic feedback to assist typing.

Upon initial use, the Halo Keyboard is frustrating and complex. Fingers accustomed to traditional keyboards struggle to acclimate to the simple tap thatâ€™s required. But as usage increases, so does comfort. Typing fluidity improves and in a short amount of time, the speed difference from traditional keyboards becomes negligible.

A trackpad is integrated into the Halo KeyboardÂ and hints at the Yoga Bookâ€™s Windows-powered sibling. While trackpads remain a necessity in Windows, the addition is unnecessary on Android, an operating system designed for touch.

Above the keyboard rests a single button that transforms the Yoga Book into an entirely new tool. With the design of the device, Lenovo doubled up on the duties of the Halo KeyboardÂ and pressing the pen button converts the aptly-titled Create Pad from a keyboard into a writing surface.

Bundled with the Yoga Book is Lenovoâ€™s Real Pen, a multi-functional tool to increase the creative prowess of the Yoga Book. By default, the Real Pen has a stylus tip, which can be used onscreen and on the Create Pad. 2048 levels of pressure are able to be detected by the Real Pen, as a result of a partnership with Wacom. That same partnership extends innovation to charging, with the Real Pen using electromagnetic resonance to charge itself while in use.

Thereâ€™s more to the Real Pen than the role of a stylus. Lenovo has bundled three pen tips, which can be substituted for the stylus tip. Along with the pen tips is the Book Pad, a specially sized writing pad with 20 refillable pages. The Book Pad magnetically attaches to the Create PadÂ and allows users to write with pen and paper, with the results instantly digitized and saved on the Yoga Book.

The vital core of the Yoga Book is performance. A great deal of tech is packed into a small device and without enough power, the Yoga Book would merely be a failed experiment. As Lenovo designed the Yoga Book to run with Windows and Android, the company opted for an Intel processor, specifically a 2.4GHz Intel Atom x5 processor. Paired with 4GB of RAM, the Yoga Book zips along.

Even with all of its features, battery life is strong on the Yoga Book. Experiences will vary, particularly with the way that the device is used, but quality battery life should be expected. Lenovo opted for microUSB charging, holding the tradition. Depending on your view, this may be good or bad, but for now, itâ€™s what users are going to get.

Software is an important facet of the Yoga Book. Lenovo has gone through several variations of software for its tablets, but the Yoga Bookâ€™s software is by far the best of the bunch.

Past software from Lenovo has been heavily skinned, taking references from iOS and ultimately resulting in a UI that was inconsistent, unattractive, and riddled with performance issues. After years of feedback, Lenovo is stepping away from its previous software. Android is allowed to shine on the Yoga Book, with only minimal customizations from Lenovo. Notable tweaks include a modified notification shade, a shift of the navigation buttons to the lower left corner of the screen, and a selection of apps from Lenovo to assist users. In addition to its own apps, Lenovo has included ArtRage and Dolby Atmos. Both apps complement the features of the Yoga BookÂ and are welcome additions.

As the sum of its parts, the Yoga Book stands on its own as a powerful, innovative device. But placing it against the competition reveals even more.

Lenovoâ€™s aim is clear. The Yoga Book isnâ€™t directed at creative-specific devices, such as Wacomâ€™s offerings. The Yoga Book is targeting Microsoftâ€™s Surface and ASUSâ€™s Transformer Book. And the truth is, it stands a good chance of beating them.

With the Yoga Book, Lenovo has developed a device that innovates in all the right areas, creating a hybrid thatâ€™s logical and functional, without sacrificing the style and convenience thatâ€™s expected from this new breed of computers. Productivity and creativity are both given room to thrive and the Yoga Book paves a path for the two to coexist on the very same surface.

In short, Lenovo has created the best hybrid of the year.