Lenovo shows off a dual-screen smartwatch, laser projecting smartphone and a Chromecast competitor 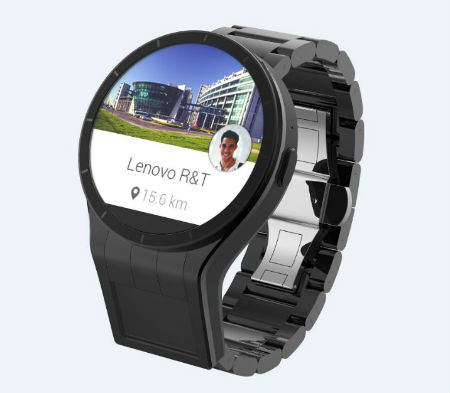 Before you question whether Motorola’s new owners are completely nuts, these first two products are in the concept stage, so don’t expect them to be making it to consumers anytime soon or with exactly the form and function they have now.

Smart Cast Smartphone
For the most part, the Smart Cast smartphone looks like a traditional phone, save for the slightly more expansive top that houses the laser projector. The projector can be used to produce a virtual touchscreen on a table (or any flat surface), and it can also be be used for more traditional purposes like showing images, video or giving a presentation while viewing separate content on the smartphone itself. The laser projector promises to offer considerably better performance than existing pico projectors that are both power hungry and typically are unable to produce enough light to be useful in a well lit space.

Magic View Smartwatch
The Magic View smartwatch has a small secondary screen that is located on the strap immediately below the watchface. That screen will allow you to view images at up to 20 times the size of the main screen, but that is achieved by holding the screen extremely close to your face, not the kind of subtle glances that we are currently associating with smartwatch usage.

Lenovo Cast
Last, but as the only real shipping product definitely not least, Lenovo revealed the Lenovo Cast. As the name suggests, this hockey puck shaped device is very much a Google Chromecast competitor. It hooks up through the HDMI port and delivers content from your phone to the TV. It uses Google Cast as well as Miracast and DLNA and also offers 5GHz Wi-Fi, so while it carries a slight premium over the Chromecast at $49, it has added functionality to back that up. Of course, Google may erase some of those advantages by the end of the day if the rumored Chromecast 2 makes its appearance.

Do you think either of Lenovo’s concept devices show promise? And do you like the form factor and added functionality of the Lenovo Cast or do you prefer the Chromecast design?