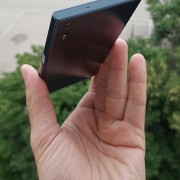 Sony’s design has been entirely square for a long time now, though it seems that’s finally going to change. These new leaked photos of a Sony device show a new design, and it’s looking pretty good.

The photos are of the SonyÂ F8331, and instead of the square edges we’re used to seeing, the edges are round. There’s also a USB Type-C port on the bottom, which is a first for Sony. Thankfully, there’s still a headphone jack. The display is saidÂ to be 1080p, though it’s reportedlyÂ a flagship.

Though it’s a good looking device, it may not come to the US. Sony is planning on focusing less on the US, so we may be left out. Hopefully we’ll hear more about this device soon.