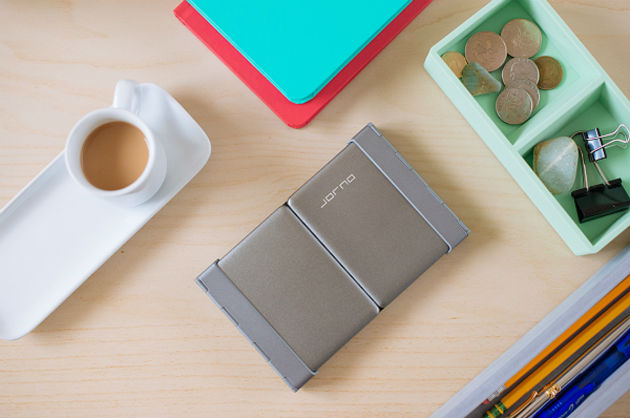 The Jorno keyboard began its life on Kickstarter back in 2012 with the promise of a pocketable folding Bluetooth keyboard for your smartphone and tablet. I remember watching it with interest at the time, as I took most of my notes on a folding keyboard in college and would have backed it if I wasn’t on a Kickstarter hiatus whileÂ I waited for my Pebble smartwatch to ship.

Well the Jorno ran into some issues, as will happen with Kickstarter projects, and didn’t finally start shipping to backers until last month. On the plus side, quite a few improvements were made to the design during that time, making the shipping product thinner, lighter and sturdier than the original proposal and just 10 percent smaller than a full-size keyboard.

The Jorno offers 85 hours of continuous use on a charge with up to 220 days of standby. It’s charged via microUSB and uses Bluetooth 3.0 to connect. It’s compatible with Android devices running 2.1 or newer, which should safely include everyone.

The Jorno’s protective case also unfolds to serve as a stand for your phone or tablet, which is convenient if you don’t mind a bit of added bulk.

While options were relatively limited back when the Jorno originally launched on Kickstarter, there are quite a few competitors in the marketplace now. Early reviews of the Jorno have seemed encouraging, though, and we are going to get one in to review ourselves along with a few others for comparison.

If you are sold on the idea already, they are selling them for $79 currently if you buy through their website and use the code “JORNO” at checkout.