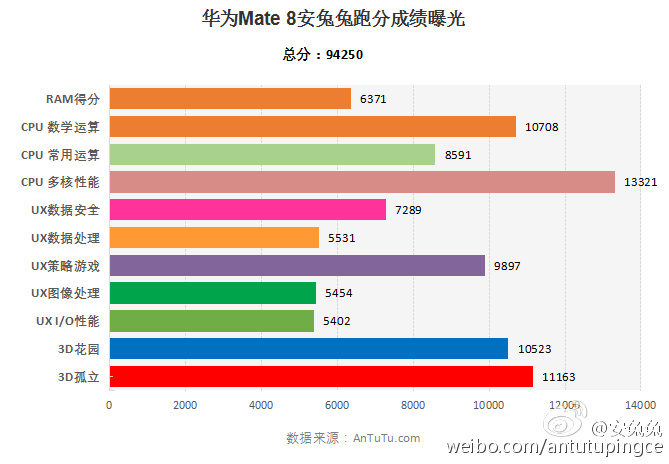 Huawei’s gargantuan Mate 8 phablet was announced yesterday and, of course, someone managed to run benchmarks on the new device. The Mate 8 carries Huawei’s home-made Kirin 950 SoC and it did visit AnTuTu before, when it scored 79,131 points â€“ well above current flagships like the Galaxy S6, which scored 67,520 points.

Well, in a new test that was, apparently, performed today, the Mate 8 reached an impressive score of 94,250. It’s hard not to take this result with a grain of salt, but we have to say â€“ we’d love to take the phablet through some heavy paces when we get our hands on it. At this point, one can only wish that this sort of power is paired with a high level of software optimizations, making the phone snappy, responsive and unstoppable. We will see.

The Mate 8 is Huawei’s newest â€œpremiumâ€ phablet-class handset. As mentioned, it sports a Kirin 950 system-on-chip, has 3 GB and 4 GB RAM variants, and comes with 32 / 64 / 128 GB of expandable storage. It rocks a 4,000 mAh battery under its hood, so here’s hoping for some extensive battery life. The handset is also equipped with a fingerprint scanner on its back, a 16 MP main camera, and an 8 MP selfie cam. It will hit the Chinese market some time in Q1 2016, with its price starting at around $470. Of course, if it travels west, this tag might get appropriately inflated.