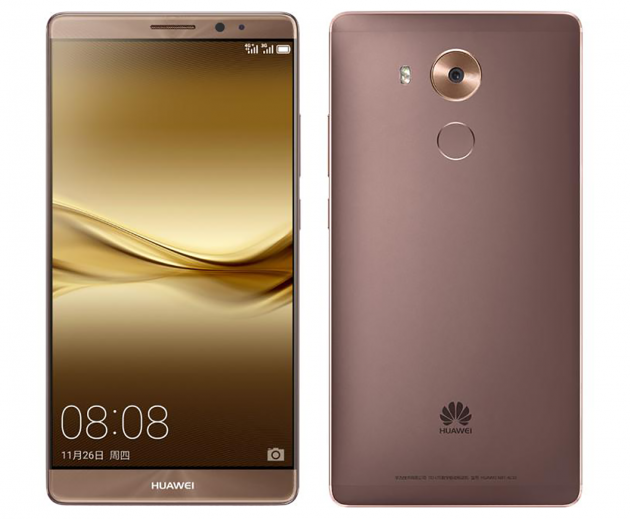 A little more than one year after the debut of the Ascend Mate7, Huawei has taken the wraps off of its latest flagship, the Mate 8.

Like the Mate7 before it, the Mate 8 boasts a 6-inch 1920×1080 display. Running on that display, youâ€™ll find Android 6.0 beneath Huaweiâ€™s custom EMUI 4.0 user interface. The front of the Mate 8 is also home to an 8-megapixel camera, and around back is a 16-megapixel camera with a Sony IMX298 sensor with optical image stabilization and an f/2.0 aperture. Resting beneath that rear camera is a fingerprint reader.

Inside of its aluminum body lives an octa-core Kirin 950 processor thatâ€™s made with a 16nm FinFET+ process. Also included with the 950â€™s chipset is what Huawei calls an intelligent i5 processor that supports speech recognition, low-power consumption MP3, and a reduction in the power consumption of location-based services.

Also inside the Mate 8â€™s aluminum body is 3/4GB of RAM, 32/64/128GB of storage, a microSD slot, and a 4000mAh battery. The Mate 8 will be sold in Champagne Gold, Moonlight Silver, Space Gray, and Mocha Brown color options. Itâ€™s going to launch in China in Q1 2016 at a starting price of 3199 Chinese Yuan, or around $500 USD. There will be beefier versions of the phone available that include up to 4GB of RAM and 128GB of storage, with the maxed out Mate 8 setting buyers back around $690 USD.

The Mate 8 has a nice design, and I have to say, Iâ€™m digging the Mocha Brown. Can we get more brown phones, please? As for its specs, the Mate 8 appears to have most of the features that youâ€™d expect from a flagship Android phone in 2015. Whether or not all of that translates into a quality device remains to be seen, but with a launch coming in Q1 2016, it shouldnâ€™t be too long before we find out.