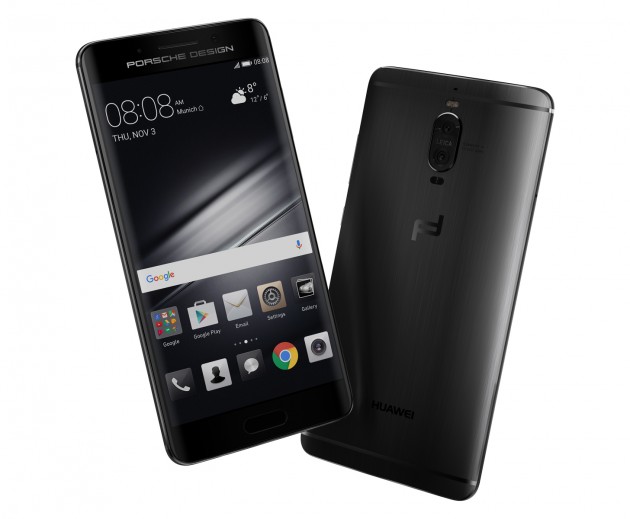 Huawei‘s latest event introduced a new wearable, but it also managed to take some time in the busy schedule to announce a brand new flagship smartphone.

The Huawei Mate 9Â features a 5.9-inch 1080p HD display, 64GB of built-in storage, a microSD card slot, 4GB of RAM, support for two SIM cards, and a fingerprint reader on the back. There is a 4000mAh battery tucked inside, and Android underneath Huawei’s proprietary EMUI 5.0 user interface.

One of the major key features for the Mate 9 is the dual camera setup on the back, which Huawei is once again promoting in partnership with camera company Leica. One of the rear camerasÂ is a 12-megapixel RGB sensor, while the other is a 20-megapixel monochrome sensor. Huawei is promoting a 4-in-1 Hybrid Auto FocusÂ feature that combines phase detection, laser, depth, and contrast focus into one captured image.

Powering the whole show is a Kirin 960 processor. Huawei says it’s an octa-core CPU and an octa-core GPUÂ thatÂ offers the best multi-core performance score of any smartphone processor. At the same time, it manages to cut power consumption by up to 15 percent.

On top of that, Huawei also introduced a Porsche Design variant of the Mate 9, which will feature a 5.5-inch 2560×1440 curved AMOLED display, 256GB of built-in storage, 6GB of RAM, and the Porsche Design branding on the back for everyone to see. It will be available in Porsche Design stores in Europe later this year, and will retail for â‚¬1395 ($1544 USD). It will arrive in other PD stores in the world, except for in the United States, beginning in January. It’ll launch in Huawei stores in Asia, Europe, and the Middle East soon as well. It’ll be available in Graphite Black.

The standard Mate 9 goes on sale first in China, France, Germany, Italy, Japan, Kuwait, Malaysia, Poland, Saudi Arabia, Spain, Thailand, and United Arab Emirates for â‚¬699 ($774 USD). It will arrive in the United States at some point in the near future. It will be available in a variety of colors, including Space Gray, Black, Mocha Brown, Ceramic White, Champagne Gold, and Moonlight Silver.

What do you think of the new Mate 9 and its Porsche Design variant?