Hangouts 4.0 for Android leaks out with a tweaked UI 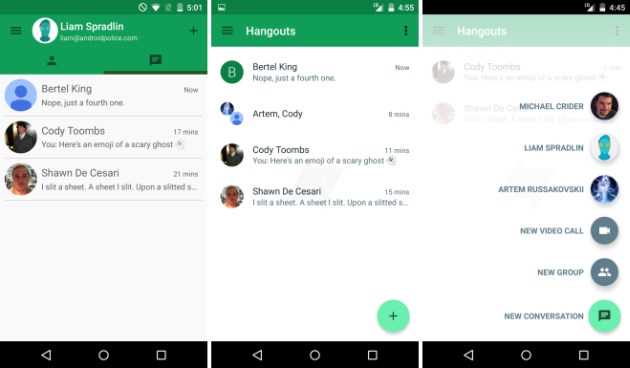 Though Material Design has been around for a while now, Google is still polishing the edges on some of its apps, one of those being Hangouts. Fortunately for common users of the apps, a new update is coming soon that will rectify many of the complaints that users have had. Rather than featuring a whole hodge-podge of different design elements, this new update cleans things up and clearly cements the UI in Material Design.

One of the most striking differences is the main screen, which no longer has tabs (unless Hangouts Dialer is installed) or an indicator of which account is signed in. Instead, it’s simply a list of your messages with a floating action button in the bottom right corner. Tapping on the action button brings up six smaller ones, much like Inbox. These include three speed dial contacts and options to start a new video call, new group message or new conversation.

Contacts can be accessed by using the sliding drawer on the left hand side. Other changes can be found in the new ability to set statuses, a refreshed chat design, the way group notifications are muted and a whole host of other tweaks and changes throughout the app. All in all, the update looks to be quite solid, although a disappointing aspect of the update is that it does not include a dedicated tablet interface, rather opting for a stretched-out phone UI.

Check out more screenshots by following the source link below.