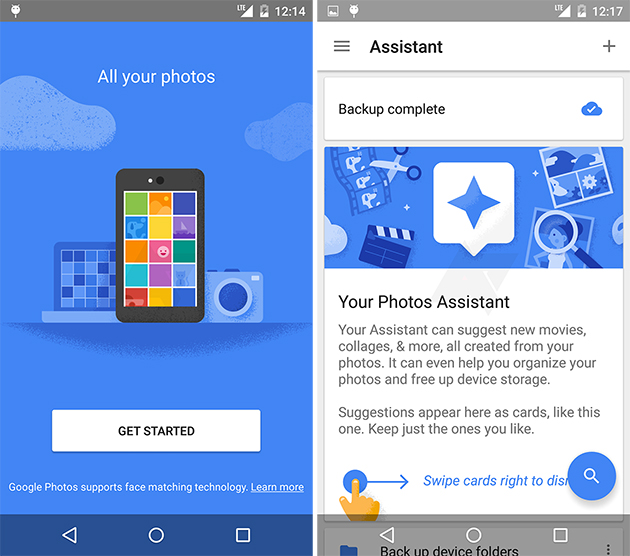 Days after a report claimed that Google could unveil its Google+-less photo service at I/O, new details on the offering have surfaced.

Several screenshots of whatâ€™s said to be Googleâ€™s new dedicated Photos app for Android have found their way online. Posted by Android Police, the images show the first boot sequence of the app, which touts features like search, face-matching tech, automatic labeling and organization, sharing, and backup and sync. The app also includes new ways to navigate through your images, like pressing and holding and then dragging your finger to select multiple images.

Another notable tweak to the app is Assistant. In addition to automatically making stores and animations for you, Assistant can aid you in making your own albums, stories, animations, and collages. The editing UI has gotten a refresh as well, including the ability to snap to aspect ratios when youâ€™re cropping a shot.

This leaked app looks like itâ€™ll fit in nicely on Lollipop, offering a Material Design UI, slide-out menu, and several other features that weâ€™ve gotten used to seeing in Googleâ€™s apps lately. Thereâ€™s a lot of folks looking forward to Googleâ€™s standalone Photos offering, which is expected to offer a better on-device experience and divorce itself from Google+. With I/O just a few days away, it may not be long before all is revealed. While we wait, you can pay a visit to AP for more leaked Photos screenshots.