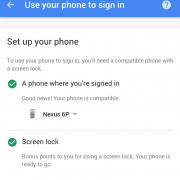 Hate passwords? If so, youâ€™ll probably love the new login method that Google is testing.

Reddit user Rohit (rp1226) recently received an invitation from Google to try a new method of signing in to his account. After enrolling in the Google Group and setting everything up, Rohit was prompted to enter his email to sign in like normal. After that, though, his Nexus 6P popped up a message that said â€œAre you trying to sign in from another computer?â€ He then tapped â€œYesâ€ and was ready to roll.

In its email, Google says that you can still use a password to log in to his account if his phone is dead or not nearby. The My Account settings also include options for changing the phone thatâ€™s linked to an account in case you change phones or decide that you want to stop using this login method. And if Google thinks that something unusual is happening with a sign-in, itâ€™ll add a couple of extra steps to confirm that itâ€™s you thatâ€™s signing in to the account.

This new login method sounds pretty neat, because entering passwords can be a pain, and some folks may not be comfortable with storing their passwords in a third-party utility. Googleâ€™s new method eliminates the password altogether, opting instead to use the one device thatâ€™s probably almost always on you or within armâ€™s reach. The bad news is that right now, itâ€™s unclear how many people are getting into Googleâ€™s test, nor does anyone seem to know how you can enroll. So now weâ€™ll all just have to sit and watch our inboxes, hoping for an invite to appear.