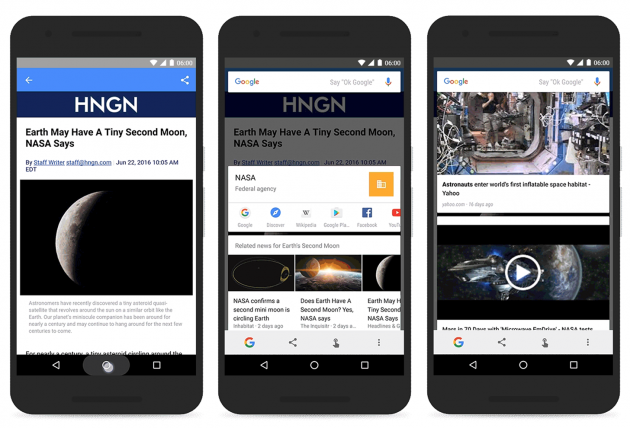 Google updated Google Now on Tap in mid-June to bring common functions and shortcuts to the forefront, and now there’s another update coming down the pipeline.

For those that happen to run into foreign languages while using their Android device, Google Now on Tap willÂ quickly translate the content with just a couple taps. UsersÂ can translate content within apps (Chrome already translates content in web pages), which should help to decipherÂ international content on social media when it crops up. When there’s text on screen that you want to translate, just long-press on the Home button and Google Now on Tap will populate a “Translate this screen” card.

Google Now on Tap’s translation works on devices in which languages have been set in English, French, Italian, German, Spanish, Portuguese, and Russian.

Google Now on Tap now offers a feature called Discover that will let users quickly pull up related information pertaining to content already on the screen. So if you’re reading an article you can bring up Google Now on Tap and activate “Discover,” which will then bring up additional content, includingÂ YouTube videos, related to what you were reading.

How often do you use Google Now on Tap?