Google Now has some new cards up its sleeve 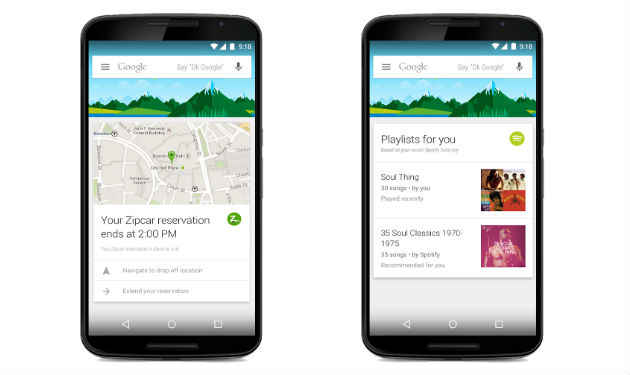 Back in January, Google announced that they had added support for Google Now cards from 40 different apps like Pandora, Shazam, Lyft, Waze and eBay. Today they’ve revealedÂ that 70 moreÂ partners are getting integratedÂ intoÂ Google Now.

You can take a look at the full list here, but some of the highlights are OpenTable, feedly, Eat24, Runkeeper, Allrecipes and Circa.

The OpenTable integration is particularly convenient as it brings in the “Pay with OpenTable” option that just came to the Android app last month. So you should just be able to pull your phone out at dinner â€” we’ll imagine you’re being polite and didn’t have it out already â€” and close out your bill by flipping over to Google Now.

As you can see in the image at the top of the post, the Zipcar card will keep you apprised of when and where you are due to return the car or offer the ability to extend the reservation. Spotify, TuneIn and YouTube will make recommended playlists for you based on your historical preferences.

While I won’t say that every Google Now card is spot on for what I would like to see, it frequentlyÂ amazes me at what it infers from the data that I provide. Seeing more and more third-party apps supporting it is extremely gratifying, particularly given how valuable Google Now is to Android Wear. This ability to surface what you need before you even perhaps realize you need it is Google’s biggest advantage in the wearables space and one that none of the other competitors can hope to match in the near future.

How well do you find Google Now works for you? What apps or features would you like to see come to Google Now that haven’t made it yet?