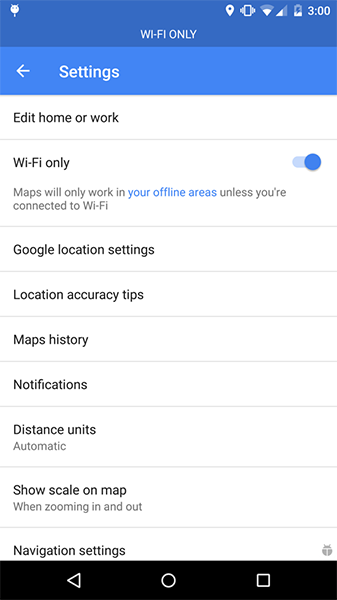 Google has brought another update to Maps that adds newÂ functionality. With the latest upgrade, Google Maps will work for those who might not have easy access to a wireless network, as well as give users the ability to only use the navigation tool while connected to Wi-Fi.

Google Maps Wi-Fi-only mode is now rolling outÂ after being tested in late July. With it, Google Maps users can restrict the app from accessing a cellular network so that it’ll only pull information when connected to a Wi-Fi network. However, as originally noted by Google, it’s possible that Google Maps will still pull a “small amount” of data from a cellular network, even when Wi-Fi only mode is activated.

When Wi-Fi-only mode is activated, and there isn’t a Wi-Fi network nearby, Google Maps will only show navigation information for offline areas that have been downloaded.

The updated version of Google Maps is rolling out now, so keep an eye out for it.